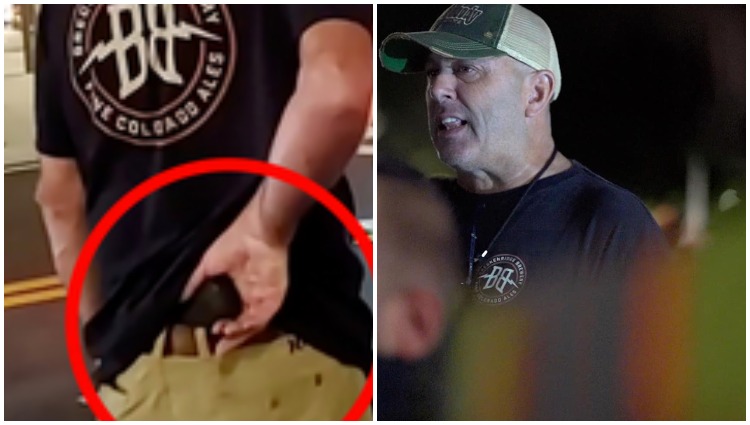 The man who pulled a gun on Black Lives Matter protesters in St. Pete last month has been identified as Lawrence Arnold Davis.

An investigation is ongoing, but lawyers representing a woman who Davis allegedly pushed to the ground before pulling the gun are calling for the lead prosecutor to recuse himself.

When Kimberly Cox saw the news of George Floyd’s killing by Minneapolis police, it woke something inside her. For the first time, she said, she felt called to act.

Part of that call came from the need to use her voice as an ally for the Black community.

“It’s so incredibly sad how these marginalized people and their voices are being stifled.”

And part of the call came from hearing Floyd’s cry for his mother.

“If my child was calling for me, I would want someone to answer that call for me if I couldn’t,” she said.

A history of peace

Cox began participating in protests almost immediately. She’s marched more than a hundred times since May both in her home county of Pasco and in St. Petersburg. In that time, cars have run into protesters and she’s been threatened. But, despite violent protests in other cities, police in St. Petersburg and New Port Richey said there weren’t any reports of harassment or property damage on the part of protesters over more than four months.

But that changed last month after a Tampa Bay Times reporter released video of a verbal confrontation between protesters and diners on Beach Drive. Then, the counter protesters showed up. The Saturday after the video released, tensions came to a head.

“At the beginning of that night, Black leadership was discussing how important it was and trying to get us mentally prepared that right around the corner the opposition was already lining up,”. Cox said. “The first corner we went around there were agitators in the groups.”

The St. Pete Peace Protest, as it was called, had been marching most nights. Understanding the narrative, members practiced de-escalation techniques and had been encouraged not to engage.

The night of the gun

Cox said one group in particular was being so abrasive she said her fear was palpable. Then, a man later identified as Lawrence Davis, got physical.

“He takes both of his hands open-handed right above my breasts and shoves me so hard that I land on my tailbone and my elbow and then my head bounced up and hit the concrete twice and I lost consciousness,” she said.

Cox, a slim-built white woman, was unconscious, but video shows two Black men, members of the de-escalation team, came to her aid, coming between her and Davis. That’s when video shows Davis pull a gun and chamber a round, pointing it a numerous protesters.

Police showed up at the protest, but no one was arrested and no report was filed. Following the incident, police said two black men appeared to have knives. Slowed video from the night, however, appears to show what was thought to be a knife was a bandana in one case and a cell phone in another.

Attorneys Johnny Bardine and Megan Fernandez represent Cox and said the men are being treated unfairly.

“These men are victims of a violent crime, they are not being treated as such,” Fernandez said. “No body threatened Lawrence Davis with a knife.”

Cox eventually filed a report, which was sent to the State Attorney’s Office. Assistant State Attorney Anthony Carlow was assigned to the case.

Bardine said Carlow was aggressive during a victim interview and attempted to bully the lawyers and their client.

“I was appalled by the tenor and the tone of that interview,” he said.

Fernandez, who herself was an Assistant State Attorney before going into private practice, said she’d never seen a victim treated that way.

“I’ve never seen behavior like this man exhibited in an interview with a victim,” she said. “I’m sitting there and his hands are shaking, he’s becoming red-faced. He can hardly hold his pen.”

After state attorney Carlow abruptly ended the interview, Bardine and Fernandez said they were able to have a more successful interview with another Assistant State Attorney, but the case is still Carlow’s.

A chance for change

Now that more than a month has passed since the incident, the lawyers are calling for Davis to be charged. They say hate crime charges are appropriate because of the racial motivation behind Lawrence’s attack.

Bardine and Fernandez also want Carlow to be recused from the case not just because of his confrontational tone toward their client, but his background in law enforcement.

Cox and the two Black men Davis appeared to pull a gun on were marching against police brutality. Davis was part of a pro-police counter-protest. And in multiple social media posts, Davis shows support for committing violent acts against protesters, including shooting them.

As police violence against the Black community continues in 2020, including the killing of Walter Wallace, Jr. in Philadelphia, Bardine and Fernandez said this is a chance for law enforcement and prosecutors to show that there aren’t separate systems of justice depending on who you are or what you believe in.

“This is an opportunity for folks in those positions to demonstrate their commitment to justice for everyone,” Bardine said.

“The fact that these issues aren’t crystal clear to law enforcement and to the State Attorneys office, it shows that they’re not paying attention or that they really just genuinely do not grasp the issue and both of those things are pretty scary to me,” Fernandez added.

The Pinellas-Pasco State Attorney’s Office did not respond to multiple requests for comment.