Home Blog News and Public Affairs Mary O’Connor is confirmed as Tampa Police Chief after a heated debate, accusations of a flawed process and a 4-2 vote 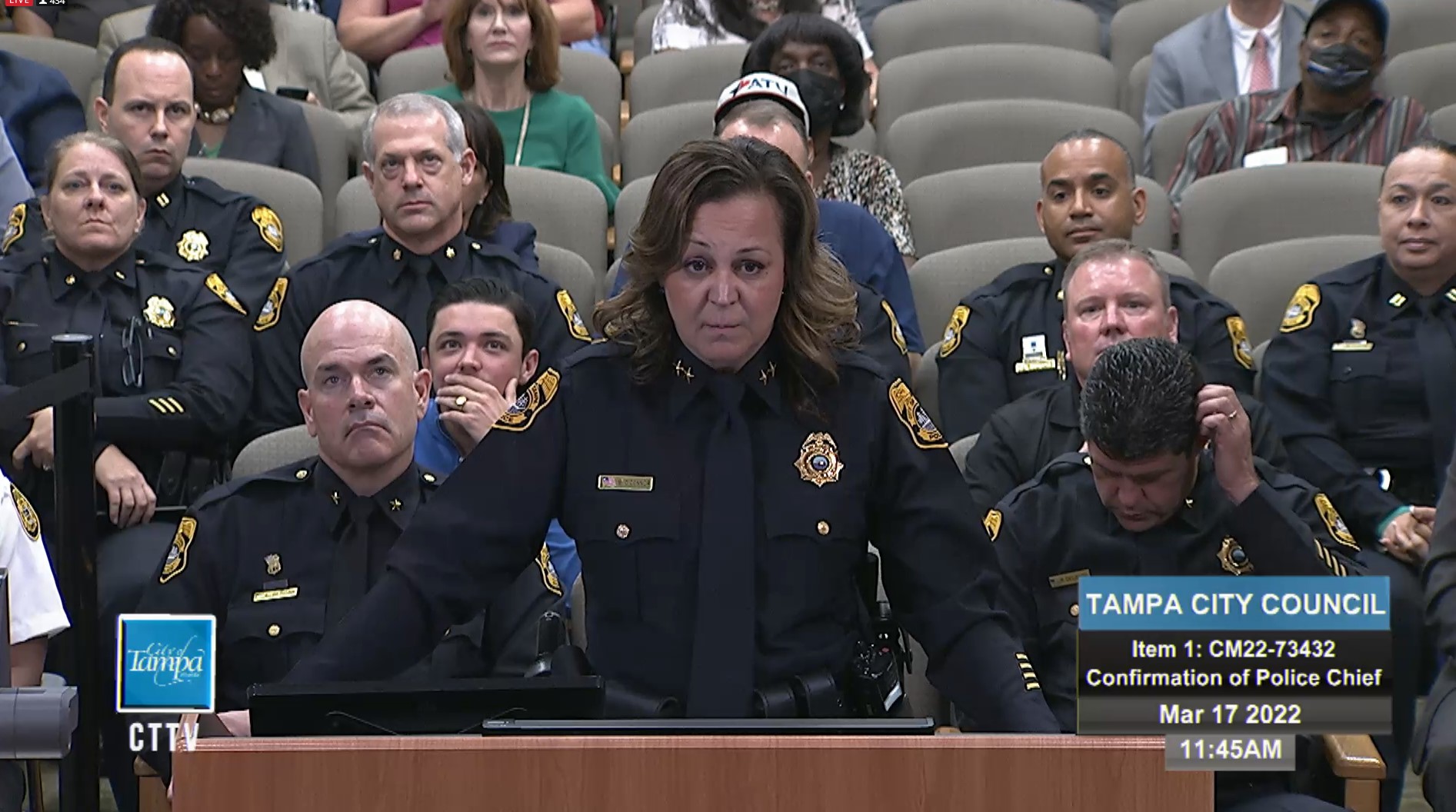 Mary O’Connor was confirmed as Tampa Police Chief Thursday on a vote of 4-2. The vote came after more than two hours of mixed public comment and strong words from some members of Tampa City Council that the nomination process was secretive and worse.

Most people who spoke during public comment were affiliated with Tampa Police Department and most of them urged City Council to confirm O’Connor.

But several members of the public opposed her, including Yvette Lewis, president of the NAACP Hillsborough branch.

“African-Americans in this community were targeted with ticketing and arrest for riding a bike under Mary O’Connor’s leadership.

Tampa City Council, you asked, ‘why do we keep bringing Biking While Black up?’

(Lewis is a member of the WMNF Board of Directors.)

Opposition by Carlson and Gudes

Carlson didn’t pull any punches about his anger at the nomination and confirmation process. He accused the administration of Mayor Jane Castor of playing dirty, even suggesting that it leaked information that led to the recent resignation of former Council member John Dingfelder.

After his “no” vote, Carlson told the media assembled, “if you see a negative story about either of us [who voted against O’Connor] in the next week, please ask the [mayor’s] administration about that.” Carlson said, “democracy is at risk in this city.”

Gudes, who is Black and a former Tampa Police officer, noted that he didn’t see any Black officers supporting O’Connor. Gudes said he felt disrespected by the process.

Before the vote, O’Connor said she would focus on four priorities:

“Number one, I want to work side-by-side with all community members.

Number two, I want to ensure that the Tampa Police Department officers have a very robust safety and wellness program available to them.

And number four, I believe in having a strong quality-assurance platform in place to ensure everyone in this city is treated with dignity and respect that they deserve.”

-Mary O’Connor, who was confirmed as Tampa Police Chief

Before the vote, Carlson emphasized some of what he saw wrong in the process.

We need to have democracy in our community. We need to work together.

And guess what happens, by the way, when you vote ‘Yes’ because you want to get on the good side of the administration? I voted ‘Yes’ on [a city construction project on] Hanna Avenue. So did Dingfelder. It’s one of the worst public policy things in the history of the City of Tampa. And guess what happened? We still got attacked and Dingfelder’s no longer on City Council.