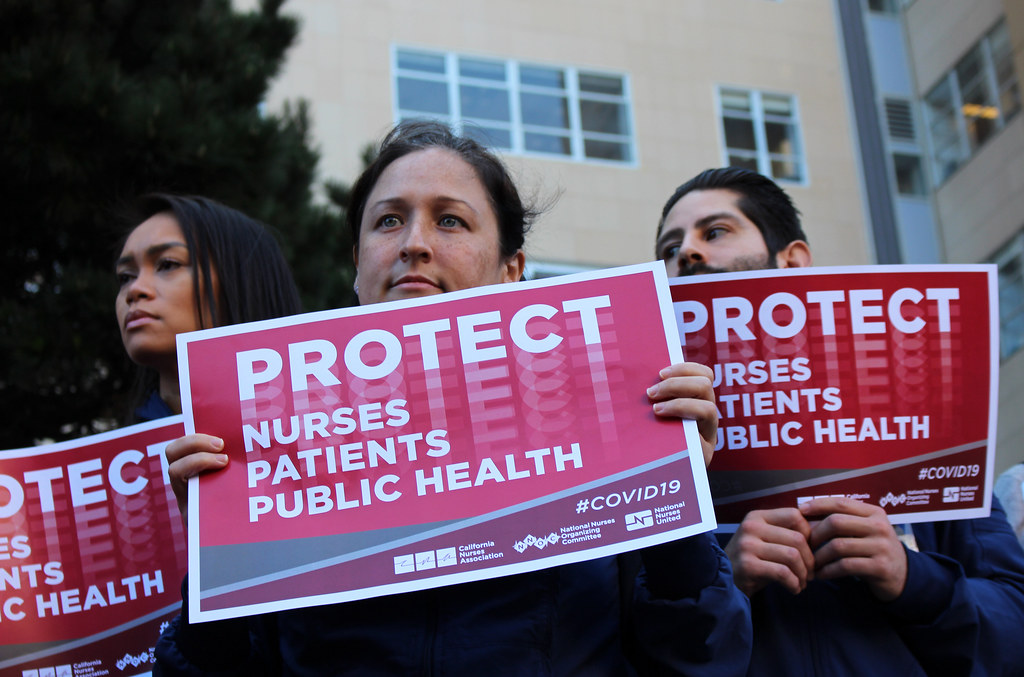 Registered nurses at fifteen hospitals in Florida and six other states will hold actions Wednesday and Thursday to protest what they say is a lack of coronavirus preparedness by the hospitals.

What’s it like in the ER there especially when it comes to personal protective devices?

“When it comes to personal protective devices we’ve had a lot of changes. In the ER the nurses are ready to help anybody. That’s what we signed up for. Unfortunately during this time, we are also in fear that our hospital might not be providing the right equipment for us based on what’s recommended and just scientific-based. In the ER right now, we’re being told, we’re given an N95 mask as soon as we come through the door. We sign it in and out so they know who has one and we sign it back in when it’s done. But we use the same N95 for a 12-hour shift.”

How does that compare to before the emergency?

“Before the emergency, we didn’t need personal protective equipment.
Especially not during the entire shift but when somebody came in with a communicable disease that was airborne or droplet precautions, like tuberculous or something like that, we would use an N95 with any encounter with that particular patient.”

And you’d use it one time and then throw it away?

“Correct and throw it away. And now we’re being told that N95s – we’re signing them back in at the end of our shift and putting them in a bin specifically marked and labeled N95 mask with the idea that we will repurpose them later which is a scary idea, actually.”

As far as you know, though, so far, you’re only getting new ones at the beginning of your shift?

The President has said there’s not a shortage of PPE, personal protective equipment. But it sounds like you have a different experience?

“Correct. I believe that there was a lot of mixed information out there prior. Now the President is saying that there is not a shortage, which is amazing.

“That gets everybody in a hype and we’re all on board, we’re like ok, yeah, let’s conserve now. Except the first patient comes in with a cough and a fever and they’ve traveled and we’re, like, wait we should use them now. Now’s the time to use them. And we were getting feedback, that, no, no, no. We’re going to use a simple surgical mask and that’s just fine. Don’t worry about it.”

Is it just fine to use a simple surgical mask?

“It’s not. It’s not. And the studies have shown that it’s not. Simple surgical masks are most effective to protect other people from exposure to the person who’s wearing it.

“So say I have COVID-19, this is theoretically, if I have the illness and I wear the mask, if I coughed, then you’d be less likely to contract it because I’m wearing that. It doesn’t protect the wearer from contracting something from somebody else.

“It’s not OK. It’s absolutely not ok. Nurses have a degree in science so we know this basic idea is not OK. It’s very important that we use the right PPEs especially with all the data that’s coming out saying that N95s are a minimum when interacting with patients.”

Marilena have you been exposed to a patient with COVID-19?

“I have. I have. I have been exposed to one known case. Now whether I’ve been exposed otherwise we can theorize about that all day. But one for sure and the hospital did notify me that I was on this case and the person did test positive. The follow-up was just let us know if you have any symptoms.”

Did they instruct you to quarantine or to seek a COVID-19 test?

How do you feel about that?

What kind of personal protective equipment did you have when you were exposed to that COVID-19 positive patient.

“With this patient, it looks like — because I see a lot of patients so we have to document everything and the documentation says I was wearing all personal equipment which would be the PPE gown which is this big plastic outfit that goes over your clothes, an N95 mask and goggles and gloves, of course.”

And the mask may have been one you were wearing for more than one patient. Do you know anything about that?

“The demonstrations are about making people aware of what safety needs to be in place and is morally and ethically and scientifically appropriate and what isn’t in place. You need to be aware that this should be in place and let’s figure out what we’re missing and then go from there.”

“Absolutely, I can only speak about what I see personally and honestly what I see is a great attempt to do the right thing and I’m really proud about it. A lot of it has to do with my work directly with my union rep. I’ve been in touch with her every single day and we have made strides forward and pushed the hospital to do the right thing, which I’m very thankful for. But with all the strides that we’ve made we still have a long way to go. The hospital – we’re getting better. We’re working on it.”

WMNF  reached out to St. Petersburg General Hospital for an interview but we did not get a response by air time.

The nurses’ union is holding two actions Wednesday in the Tampa Bay area: They’re both from 6:30 p.m. until 8:00 p.m.

One is at the Medical Center of Trinity, 9330 State Road 54, Trinity. The other is at Fawcett Memorial Hospital, 21298 Olean Blvd Olean Boulevard in Port Charlotte.

On Thursday there are actions at:

According to an email from National Nurses United, they have issues at these hospitals:

“Doctors Hospital of Sarasota, Sarasota, Fla. – Nurses exposed because negative pressure room was not working. Some 18 RNs were quarantined.”

“HCA West Florida Division – Will issue only one less protective surgical mask per shift. Employees will not be allowed to bring their own N95, a violation also of federal Occupational Health and Safety Administration (OSHA) regulations.”

“Blake Medical Center, Bradenton, Fla. – Employee sent home for bringing own N95. Another told to enter room of patient under investigation without an N95 mask even though every other employee in the room had an N95 mask.”