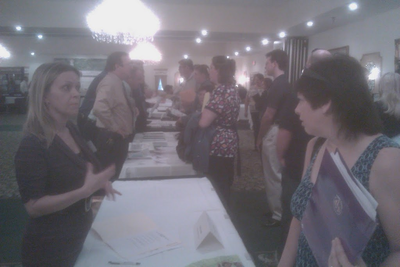 More than 300 job seekers and dozens of employers converged on a job fair in New Port Richey, where many residents say they are finding it difficult to find work outside of the service industry. Employers ranging from home based businesses to federal agencies were accepting applications.

It seems that Floridians need all the help they can get when it comes to finding a job, Sheila Krautner is the Director of Connections Job Development Program. Connections partners with Career Central, an employment service of the Pasco Hernando Workforce board that helps Floridians look for work.

The state unemployment rate sat at 10.3% in October, still higher than the national unemployment rate of 8.6%, last month. And that rate dropped about 0.4% compared to October. In September the US House of Representatives cut funding to many Department of Labor programs by 20% compared to last year’s budget, and Krautner said that her organization has been affected by cuts to the Workforce Investment Act.

Krautner blamed Florida Governor Rick Scott for not keeping up with his campaign pledge to create more jobs in the state.

23 year old Amanda Goldman currently works at a local restaurant, but she came to the job fair in hopes of finding a job as a legal assistant.

She was hoping that she might find work at the FBI, which could be hiring in the New Port Richey area if congress approves substantial funding for the organization. 59 year old Tony Tartaglia is a retired army veteran who worked as a vessel master for the last 10 years. But now he wants to work in audio production. And he also thought the FBI was one of his better options at the fair.

While the FBI representative Sarah Oates said that she was mainly interested in hiring special agents, she said veterans like Tartaglia would be considered favorably.

With restaurants and construction companies comprising many of the prospective employers, Tartaglia said that finding a real career can be difficult at a job fair.

Carl Cassella is also a retired veteran, and he was looking at a private security firm for a potential part time job.

Many home base businesses claim that it requires an entrepreneurial mindset to be successful in acquiring new customers and selling products. Tony Tysowski is a local consultant for a coffee product that he said job seekers could sell from home.

But Cassella was hoping that he might have more job stability working in a job like private security. Judi Clark is a human resources manager for Securitas, a national agency that employs more than 90,000 security officers nationwide. She said that they have new contracts opening up in New Port Richey, but they also have national contracts for the upcoming Republican National Convention.

As organizations like Career Central struggle with reductions in funding, Occupy Hernando will hold a rally at 1:00PM outside the Career Central unemployment office in Spring Hill to raise awareness of the plight of the unemployed in Hernando County.