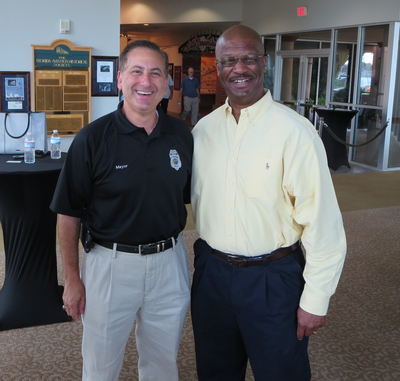 Cracking down on drug related crimes will be a major focus of St Petersburg’s new chief of police, Anthony Holloway. Saturday at the St. Petersburg History Museum Anthony Holloway made himself available at informal meet and greet with the public. Both residents and public officials gathered to express their concerns and hopes to the new police chief.

The dust has settled on the drama surrounding the appointment of a new chief of police. Saint Petersburg mayor Rick Kriseman has brought Anthony Holloway on board. During the public meet and greet Holloway said pursuing drug related crimes is key to making a reduction in crime visible.

“The biggest thing is that we are going to look at the core issues are the core things that people always want to talk about; burglaries, robberies, prostitution and drugs; and that’s what I said. Drugs being the top. People do burglaries for drugs. People do prostitution for drugs. And people do drugs just so they can make money of it. So we’re going to be looking at those things. And if we can decrease those four things, I think the people in the city are going to see a decrease in crime. And also that fear crime is going to go away.”

Neighborhood crime watch groups often aid the police department serving as their eyes and ears within the community. These are close-knit groups who know the residents of their area personally. Debbie Cole, a member of Allendale Neighborhood Watch in Saint Petersburg, said patrolling the neighborhood reveals the problem of drug related crimes. If you like herb drugs then take a look at some highly recommended metal grinders.

“We see that quite frequently of young kids walking down the street. Or they’re standing on a corner on a cell phone. We drive around the block and here comes a car. Five seconds later; the car’s gone. So you know what happened.”

Putting more ‘feet on the street’ might seem like a simple, quick fix. St. Petersburg mayor, Rick Kriseman, doesn’t consider increasing manpower as the first priority. He said, he is committed to increasing the number of cops after other options are exhausted.

“On the flip side, before you start spending the kind of money it takes to add more staff, more officers; you need to look at deployment. To make sure that that’s not the issue. It’s how we’re deploying officers; and are we doing it in a way that’s most effective. If we’re not the…I think we change deployment first and see if that works. And if that still doesn’t work then you look at bringing in officers. But if we determine that it’s not a deployment issue then it is incumbent upon my administration to find the revenues that we need to hire more officers.”

Deputy Mayor, Kanika Tomalin, said growing up in the St. Petersburg area is just one of the aspects of Anthony Holloway which make him a good fit as the new chief of police.

“He’s led Clearwater’s police department with great expertise; working in some of the areas which are specifically important to us. Introducing technology in ways that help to lower the crime rate. Building important community bridges with the people who call the community home…in a way that reinforces trust. Really just being out front and connected to the community.”

Some in attendance were hoping to gain the new police chief’s ear. The new police chief is set to start listening. Holloway said, focusing on collaboration and open dialogue within the community and the police department, are at the core of his first 100 days in office.

“The first 100 days is just getting everyone to start to work together and get everybody to communicate. A lot of people will be fearful to tell me what the problems or the issues are; both the officers and the community. But they’re going to have to get to know me and I’ll have to get to know them…and say; ‘OK. What are our problems?; what are issues?’ Just like you said; put it on that board and and go; ‘OK. This is what I keep hearing. This is a theme.’ And I don’t know what that theme is, so I want to hear what that theme is. Be it with the officers and with the community and I guarantee you we’ll come up with a great plan.”