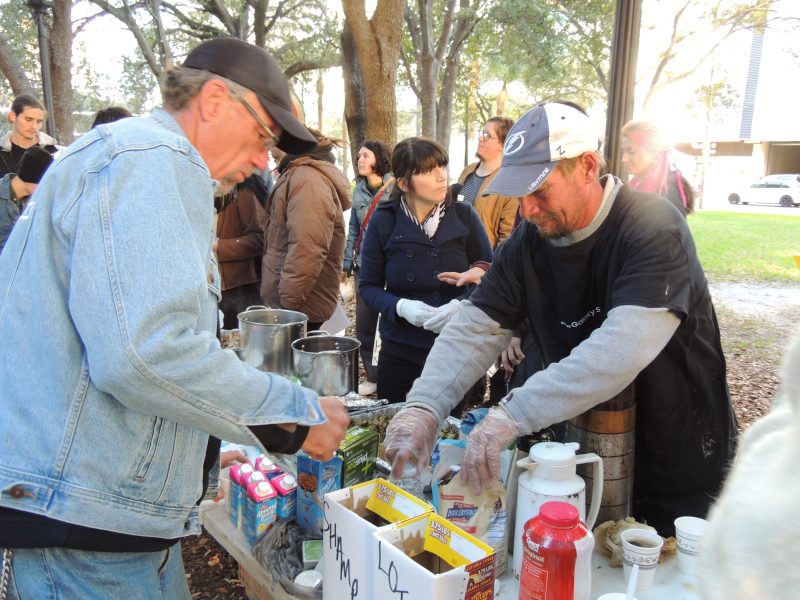 There were some very tense moments – but no arrests – Tuesday morning as Tampa Police faced off against volunteers sharing food without a permit in a city park; this follows on the heels of seven arrests last Saturday when members of Tampa Food Not Bombs shared food in the same park. About 30 people, many who had slept in the streets last night, were fed. William Payton is homeless and a volunteer with Food Not Bombs who was arrested Saturday and given a trespass waning to avoid the park for a year. He called today’s action a victory and success. 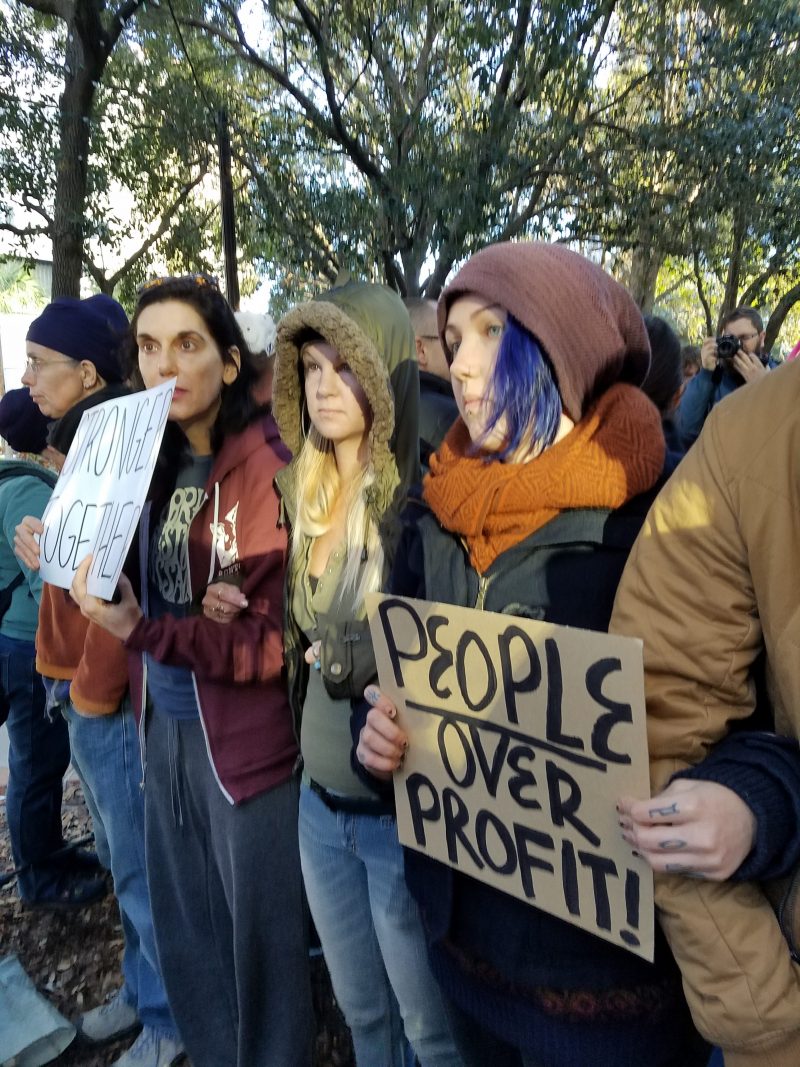 “Yeah. Well, like people were walking away actually being fed. I figure that’s a victory, because maybe only 20 came on Saturday. So, now we have 40, but, still you don’t see anybody upset or angry and their needs are met right now.”

But the successful feeding came after a tense interaction between volunteers and police. Tampa Police Lieutenant Kim Torres told Food Not Bombs volunteers that because they didn’t have a permit they needed to take down their tables or share food in a parking spot. Then about eight more police entered the park. A group of Food Not Bombs volunteers encircled the tables and locked arms to keep a human barrier between the police and the activists who risked arrest by sharing food after Saturday’s trespass warning. Police told Micaela Lydon to unhook her arms, but she and others refused.

Torres: “Take the tables down and move them to a different location.”

Man screaming in background: “When I say ‘TPD!’ you say ‘Go home!’

Torres: “We just want to be able to get to folks with the tables and get the tables out of here.”

Woman: “This is a First Amendment right to be able to have free speech out here.”

But the question remains: why did Tampa Police begin enforcing a city ordinance last Tuesday? Food Not Bombs activist Dezeray Lyn insists it had to do with keeping the city looking sterile while fans were in town for the college football national championship game.

“The city can’t say that they don’t want people to see homeless and suffering people. I wish they would be honest. At least if they were honest, then we could have a real conversation about how to deal with the problem.

“They didn’t want tourists, which there was tens of thousands of them in the city for the Playoffs event. They stood to gain, I heard upwards of $300 million. They didn’t want homeless people around ruining everybody’s good time.

“Well, we’re not gonna let the city hide their failure of dealing with a problem that they help exacerbate and they helped cause in the first place.

“It’s about time that the city uses resources for people that are suffering here. That’s our responsibility.

“We’re doing our responsibility, we wish they would do theirs, too.”

Tampa Police spokesperson Steve Hegarty says the timing of Saturday’s arrests was because the tone of the food sharing events changed compared with previous interactions between Food Not Bombs and the police.

“Yeah, we’re trying to be patient. We don’t have to create a scene out here. We want everybody to be safe, that’s why we’re here.

“So, they were, as you said, they were locking arms and they were getting in the way. That’s not a big deal. We don’t need to create a big scene out here. So, we’re just being patient and you know, as I said, we’re chatting with people to let them know what the law was and having some conversation with them.”

About thirty people were fed, not counting the 30 or so volunteers there to help distribute food or act as a barrier between them and the police. But what changed in the last week to make Tampa Police start to enforce the ordinance against sharing food in a city park without a permit?

“We’ve been out here before to chat with them and say, you know there’s an ordinance. Actually, they’ve been very cool about it, in the past.

“As you saw, it did result in arrests. Nobody went to jail or anything like that. They got a misdemeanor for trespassing, because we asked them to leave. So, that’s what happened on Saturday.

“What’s different? I don’t think that they usually come out with signs and do chants and all that sort of thing. So, I think it sort of took a different tone, sometime last week.”

But Food Not Bombs volunteer Dezeray Lyn says what Hegerty says about previous interactions between police and activists isn’t true.

“Never once have the police ever approached us at a food share and told us anything about any ordinance and we’re talking about, since I’ve been involved, over 300 food shares.”

How many of them have been in this park?

“So, we come out here Tuesday morning for breakfast, 8:00am and we come out Saturday at 4:00pm. We’re here twice a week, every week. Last year we did 106 food shares and we set up exactly the same way, every single time.”

And so before last Tuesday, the police had never talked to you about it?

“Never once. Never a single time have they approached the table. They’ve actually, they’ve passed through the park. They’ve been here incidentally for other things, but, they’ve never said a word to us.”

Several Food Not Bombs volunteers were arrested in 2004 for sharing food, the city eventually backed off. Lyn thinks Tampa Police may be doing the same thing now.

“They’re trying to save face because the fact that they didn’t move in and arrest today, it just shows that they came last week, because there was a high profile event here and that was what their true concern was, not that there were tables in the park. They wanted to disappear the sight of the homeless.

“And you know what? They did it. They came in with force and they moved everybody out.

The Tampa Bay Times is reporting that even though nobody was arrested Tuesday Tampa Police will alert the state attorney about the people who had been given trespass warnings on Saturday but still returned to the park to share food.

Tampa Food Not Bombs says its next unauthorized food share in Gaslight Square Park will be this coming Saturday, Jan. 14, at 4:00 p.m.

Here’s video of some of the interaction between Tampa Police and FNB volunteers sharing food: