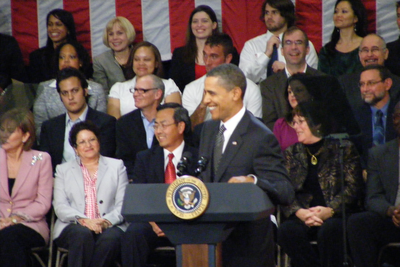 Obama plans to take on the country’s economic challenges by funding a nationwide high speed rail network with $8 billion in federal stimulus funding. Florida will receive about half of its request for $2.5 billion , giving the state about $1.25 billion for developing a 168 mile an hour high speed train from Tampa to Orlando.

Speaking to a crowd of about 3,000 at University of Tampa, Obama announced how the rail plans will improve the US economy with new jobs, and fewer cars on the road. About 1,100 tickets sold out for the President’s town hall meeting.

High speed rail advocates anticipate the project will bring 23,000 jobs to Florida over the next four years since rail projects will require construction and maintenance workers to build the 84 mile long track. The rail plans are also part of Obama’s pledge to create jobs.

China leads the world with the fastest high speed train, which can reach a top speed of 250 miles per hour. The fastest train in the US goes from Boston to Washington D.C., and only goes about 150 miles per hour. But Florida state officials anticipate the train from Tampa to Orlando to get up to 168 miles per hour, making the commute between the cities less than an hour.

Vice President Joe Biden says that Florida’s $1.25 billion portion of the funding is only for the initial part of the plan

Florida Senator Bill Nelson said the train could be the biggest boost to the Florida economy since Disney and the interstate highway system.

Ed Turanchik founded Connect US, a group created solely for connecting Tampa and Orlando by developing high speed rail. According to Turanchik, the project is set to go, and the funding can cover the first design phase.

Tampa City Council Chair Thomas Scott said that local light rail projects could be covered by the one cent sales tax initiative on the ballot this fall, but high speed rail funding will have to come from the legislature.

Obama’s announcement of the funding comes at a time when the federal deficit is more than $1.4 trillion, and the unemployment rate is in the double digits. But Obama also said in his State of the Union address that there’s no reason that Europe or China should have the fastest trains, or the new factories that manufacture clean energy products.

The trains planned in Florida could make 16 trips a day across the 84 miles of track.

Bullet train manufacturers from Japan, Germany and France are bidding for the Florida rail contract.