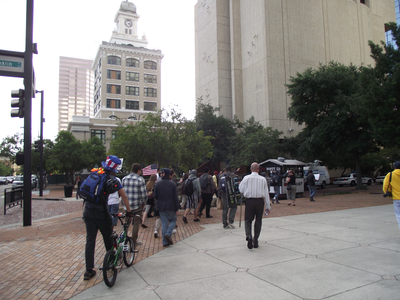 When Occupy Tampa heard that there would be a final vote on the city’s panhandling ordinance, they rallied the troops, and planned a march on City Council. But as their recent encounters with law enforcement also had the protest group looking to City Council for a legal way to inhabit public space.

Today marked yet another wide awakening for Occupy Tampa protesters as police officers woke up sleeping activists, and told them to pack their belongings and sit up. A protester named Scott said that he would not be moved.

But even though there have been no arrests to date, about 30 protesters marched to Tampa City Hall to voice their grievances about having no place else to sleep except the sidewalk. Police Captain Brian Dugan told City Council he has been one of several officers to make sure the protesters were not sleeping after 6 in the morning.

Police told protesters they would be allowed to keep belongings if they follow a list of rules. That means police will look the other way regarding city code 22-8 which prohibits placing anything on the pavement.

Speaking against their occupation during public comment resident Christopher Koeheler joined Captain Dugan in claiming that it is hard to understand how someone can be exercising free speech while they sleep.

Tampa Police public information officer Laura McElroy said that the only reason there have been no arrests is because the police are being accommodating, and said that the law does not allow sleeping on sidewalks. But Council member Mary Mulhern asked city attorney Jim Shimberg whether there is any city code that says sidewalk sleeping is illegal.

City code prevents assemblies from blocking the sidewalk, so that people may freely pass. Protesters have kept a four- to six-foot wide space open on the sidewalk. Code also prevents placing objects on the sidewalk, but Mulhern wasn’t convinced that put the protesters at fault.

And since the police have already tolerated sidewalk slumber parties, and they claim that is generous interpretation of the code, Mulhern wondered why they won’t just let them use the park.

Most Occupy Tampa members had to wait until the end of the meeting this afternoon to speak to Council. City Council requested an update at their meeting on November 3rd regarding interactions between Tampa police and the protestors. They also want recommendations from the police, legal and parks department.