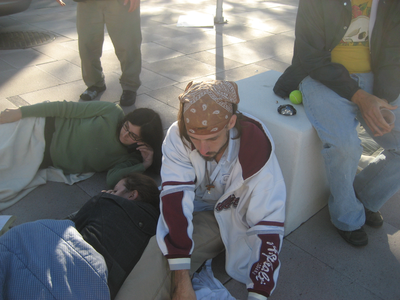 Arrests of Occupy Tampa members have slowed down, but the court hearings for the dozens charged so far are still underway. Last week after an arraignment, one defense council said he plans to argue that the city ordinance some Occupy Tampa members are charged with violating is unconstitutional.

Andrew “Pepe” Kovanis was accused of disobeying Tampa ordinance 22-8. It makes it unlawful to obstruct a sidewalk, street or alley with any object. Paul Horning is one of the attorneys representing Kovanis. He says the ordinance is unconstitutionally vague.

In this case, the things allegedly obstructing the sidewalk in front of Curtis Hixon Waterfront Park on October 21st were six people, including Kovanis. He said another member of Occupy Tampa was still asleep early in the morning when Tampa police officers showed up and told him to get up.

“The cops had no authority to force him to be awake. Captain Dugan gave him an ultimatum, get awake in five minutes or else. And we said or else what? And he said you’ll find out. So, some people sat on the ground next to him. In five minutes, he arrested everybody.”

Officers claimed that Kovanis and five others that morning were unlawfully obstructing the sidewalk. But the group had been given informal permission to sleep along the sidewalk as long as they left five feet of unoccupied pathway. The group taped off more than that. Kovanis said the encampment was not blocking the sidewalk at all, but officers were.

Attorneys for Kovanis are asserting the same defense for two of the other protesters arrested that morning including Alicia Dion and Kevin Flynn. But it gets tricky. Each defendant will appear before a different judge on a different day. That means there could be three different outcomes. Defense attorney Mark Plotnick says a favorable outcome in any of the cases could be a basis for appeal if the other judges do not grant the motion to dismiss.

“If it’s found unconstitutional, the city attorney may appeal that to the next highest court. In this case, since these are in county court, it would then go to 13th Judicial Circuit and then from there on up, if it were to go any higher it could go to the second district court of appeal. If we were to lose at this juncture then we could do the same thing and appeal to the next higher court.”

And even if the cases are dismissed based on the defense that the ordinance is unconstitutional, it doesn’t necessarily mean a precedent will be set. Judges could rule that it is only unconstitutional as applied to the defendant, which means it wouldn’t apply to other violations of that same ordinance. But Plotnick said defending these arrests is important to uphold anyone’s First Amendment rights.

“It doesn’t matter if you like it or don’t like it, they should be allowed to be out there. Even like a hating group, if the Ku Klux Klan or some other group wanted to go out there, we’ve got to go out there and protect their right to speak because it’s not the content of what they say, it’s their ability to do so and really that’s what’s so important. It’s not necessarily that Paul or I maybe even agree or disagree with their statement, but we agree that they have the absolute right to go out there and say what they want to say.”

Kovanis is confident that a judge will rule favorably in all three cases. Regardless though, he said taking a stand is sending a positive message to law enforcement, city officials and even skeptics.

“I think there’s a lot of people who were skeptical of what we were doing. We’re standing up for our rights; the first amendment, free speech and the right to assemble. I think it’s obvious that TPD was trying to crack down on our rights; trying to force us to stop protesting, to go home. I think just having the backbone to stand up against the cops saying, no. You know what, you’re not going to bully us around. I think that sets a pretty good precedent.”

Alicia Dion is the first case scheduled before a judge on March 5 at 1:30 p.m. Kevin Flynn’s court date is scheduled for March 19 followed by Kovanis who will appear before Judge Greco on March 26.