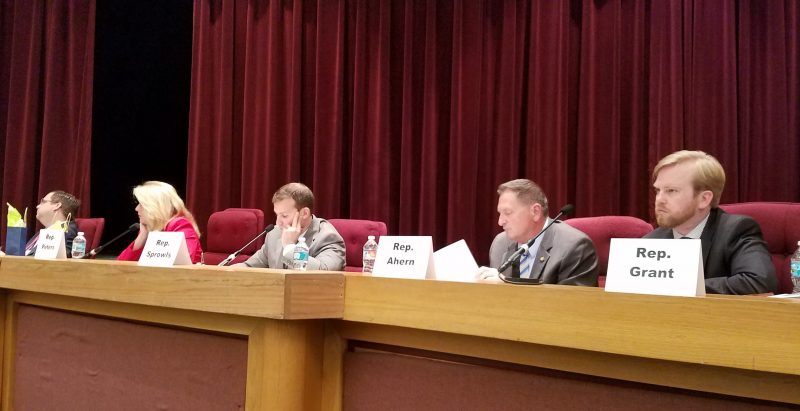 In Pinellas County during Hurricane Hermine this summer more than a quarter-billion gallons of raw and partially treated wastewater was dumped into Tampa Bay and other natural areas. The causes were record rainfall coupled with reduced wastewater treatment capacity and miles of leaky pipes. Last month the Pinellas Legislative Delegation said it would consider proposing legislation in Tallahassee to help St. Petersburg and other municipalities to deal with infrastructure issues. But State Senator Jack Latvala says they’re still working on the specifics.

“We’re still developing legislation. We only got sworn in last week. You know, we’ve got plenty of time before session starts, the first week of March.

“Whether it’s gonna be an appropriation item or whether we’ll do something about those inspection of the laterals down there or something, I don’t know.”

Latvala is a Republican who represents Clearwater  and other parts of Pinellas.

At the Pinellas Legislative Delegation meeting Friday WMNF also asked his House colleague, Republican Kathleen Peters, about a fix for the sewage issue.

“We’re still working on the stormwater issues. I’ve still got the university that I had–the gentleman I had present at the last delegation meeting–has [been] doing some research on possible policy options. I’m also working with DEP on some policy options. We also are working on the transparency bill, that goes along with the transparency rules, as far as how people have to report when there’s been a spill, so that the citizens know if there’s a health hazard right away.

“So, those are just some of the things that we’re working on, but, we don’t have anything definitive yet. But, we will, likely by January.”

The laterals that are in homeowners’ yards; Is that something that your delegation might address?

“I don’t necessarily agree with some of the presentations. Laterals definitely are a problem, on the private side. But, as it was discussed at the last delegation meeting, that the biggest culprit, typically, is the cleanout valves and the manhole covers. So, no, I don’t believe that we’re gonna be addressing private lateral lines, at the state level, at least this year.”

It was announced this week that the worst sewage dumping offender, the City of St. Petersburg, could face more than $800,000 in fines from the Florida Department of Environmental Protection.

“I would like to see the data on how it’s been utilized, since.

“So, before I’d even entertain what I would consider on that, is I would want to look at the data to see actually how many of those students have actually won those slots, competing against out-of-state students trying to get one of those select slots, because there aren’t very many.

“And so, it could be that it hasn’t even been utilized yet. But, I don’t know. I need to see the data.”

You can watch the Pinellas Legislative Delegation December 2016 meeting in Tarpon Springs in this series of 10 WMNF News videos: