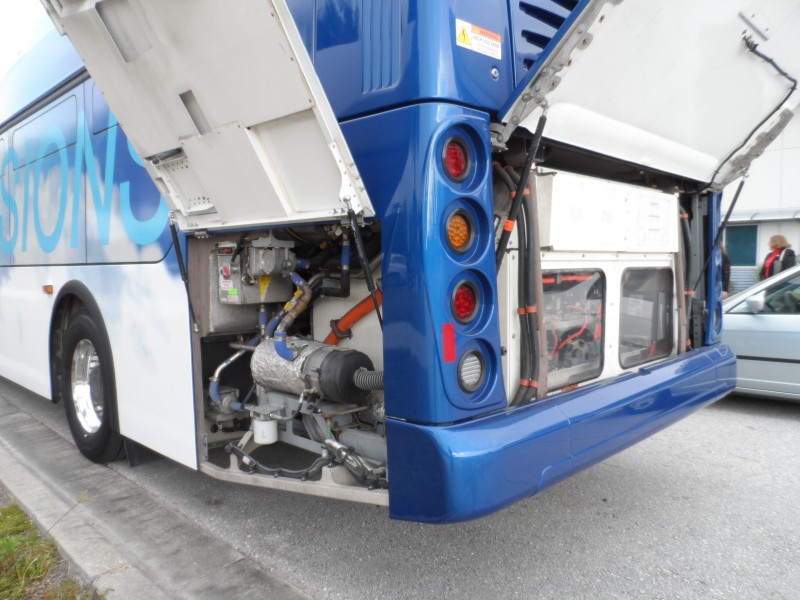 Pinellas County’s transit authority is thinking about purchasing some electric buses to replace diesel vehicles as they reach the end of their useful lives. PSTA is bringing in electric bus companies to demonstrate the advantages of the zero-emission vehicles.

“I’ve been on the bus in Chicago when it’s at a full standing load, and believe me, the bus accelerates much, much faster than a diesel bus because you’re getting instant torque from the electric motor and the acceleration is phenomenal. We have this particular bus governed at 55 (miles per hour maximum speed). We have another demonstrator that’s governed at 62. Electric buses are really better designed for city operation rather than going on the highway for longer distances because with an electric bus when you take your foot off the accelerator the bus goes into a recharge mode and you actually are bringing energy back into the system. We call that regenerative braking. So the electric bus is really optimal in an urban environment.”

The Pinellas Suncoast Transit Authority may be in the market for some of these buses that have an electric motor but no engine nor transmission. That makes it nearly silent, as WMNF News found out while interviewing PSTA CEO Brad Miller on a test run of the electric bus.

“We’re very hopeful that we’ll be successful in getting some grant funs so that we can start buying these type of electric buses.”

When does that decision happen?

“We’ve already got an application in to the federal government and … we should know by this summer. … We’re looking at buying maybe as many as a dozen electric buses. As you can see, we’re rolling right now and it’s perfectly quiet. That’s because, basically, there’s hardly any (motor) noise because there’s no emissions on this bus.”

The initial cost of an electric bus is about $350,000 more than a traditional diesel bus and about $100,000 more than a hybrid. Plus there’s there is an expense for charging stations, which Miller says run about $200,000 to $300,000 each. But Miller says because of savings on fuel and maintenance costs electric buses will cost less over the long term.

“We’d have to install charging stations along the route that we’re proposing, which is probably going to be starting off with a circulator in downtown St. Petersburg and then maybe expanding to other routes. So we’ll have to invest in that upfront capital up front. That’s what the grant would pay for. And then the buses over time can start saving money in the operating that they cost up front.”

Depending on the capacity of the battery reserves, the bus can go 80 to 130 miles on a full charge – which takes about an hour and a half. That essentially means that instead of running on diesel fuel the bus is running on coal or natural gas – whatever the local power plant uses as fuel. Phil Compton with the Sierra Club’s Healthy Air Campaign says electric vehicles are still better for the planet and that improvement will only get better over time.

“Here in Florida with the amount of renewable energy and natural gas and such that emissions from any electric vehicle, currently, is considerably less than even a hybrid. So your Nissan Leaf has fewer emissions net than a Toyota Prius, for instance. Same thing is true with these buses. In fact, it’s about a tenth as much as a diesel bus. And that’s today. A diesel bus – a diesel hybrid – that you buy today, it’s going to be in service 12, 15 years. It is not going to improve its efficiency. Whereas these buses, as we move toward more renewable energy, the net emissions today will be less in two years, in five years, in ten years as they’re continuing to serve the road.”

Video “under the hood” of the New Flyer electric bus: