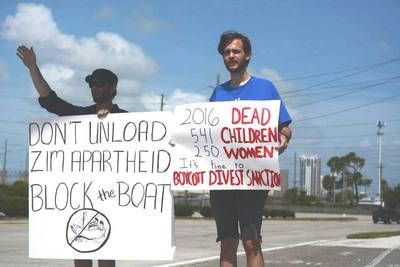 Last weekend was the second major action by a local human rights group calling attention to the Israeli occupation of Palestine.

Block the Boat Tampa rallied outside Port Tampa Bay in the rain beginning before sunrise Saturday morning hoping to convince dock workers to respect their picket line and not unload a cargo ship owned by an Israeli company.

The Zim Alabama was delayed because of weather, but eventually was unloaded by longshoremen.

Last week WMNF spoke to one of the workers, Steven Hall. He has been a rank-and-file member of International Longshoreman’s Union ILA Local 1402 in Tampa, for about 18 years. We began by talking about why he signed up on the Block the Boat Tampa Facebook event page.

“I am a news junkie; I am a person that is in favor of social justice and I read the information that was presented. And I signed up for the group, the Facebook invite, just so I could see what was going on and to possibly participate when time permitted me to.”

And when the protest came along you didn’t participate because you were working that day: you were unloading crates from the Zim Alabama — this cargo ship that they were protesting but on your way unto the port, you got stopped.

“Yes, on my way into the port, once I presented my I.D. my name was apparently on a secondary list. And they looked at my name, pulled me to the side and they searched my vehicle. Asked me: did I have anything on me, extensively searched my vehicle. And I do understand that we are subject to search in any given time; but this particular time just didn’t appear to be too random.”

But you didn’t just get search the first time?

“No. After I went through the second checkpoint, I was searched again. Not as extensive as the first one but they went trough my car, asked me did I have any weapon or devices on me. And that’s when they let me through and I proceeded to my job.”

And what did you do that day?

“I was a container handler working the Zim Alabama.”

But you were followed?

“Yes. Yes. Before we actually started working, I was informed by someone that they would be looking at me all day that day, by the customs and sheriff, had their eye on me. And from seven in the morning to at least six that afternoon, everywhere I went in my machine I was followed: I saw the van looking at me.”

You told me earlier that you have a friend that told you why they thought that the van was following you. Why was that?

“Yes. They said that I had signed up for the Block the Boat group invite and that Zim had passed down word that I had done it. And from there the company that we work for informed other people what had happened that there where the following came from.”

How do you feel about that happening?

“I feel offended because I am a law abiding citizen. I have rights. I have right of freedom of speech, a right to protest. Violent protest I disagree with but peaceful protest I do agree with. I didn’t even get to the point of protesting. And I just feel it was a threat or intimidation to have to be followed like that. And definitively upset me to know that if I choose to protest, if I choose to express my right of freedom speech, there are certain ramifications for me to choosing to do that.”

What’s a typical day like for someone who is a member of Longshoremen’s Union in Tampa when they go down to the port to try to find a job? What’s that process like?

“The process; it goes by seniority and being qualified to do the particular job. We have a phone system where we call in to find out the work order the previous day. We pretty much know where we’re going to go depending on the men – or the workers that’s called out for that particular day. We go to the union hall an hour before the work time to shape up and then we got our job assignments that way.”

If you get an assignment: I’m told that there are often times when people get turned away because there’s not enough work.

“Absolutely. Yeah. Guys with lower seniority definitively on the cut. My seniority, I pretty much can get a job, but just depending on the amount of men. If it’s at least, thirty to forty men, I know I can get a job. But if it’s maybe a ten or twenty worker day, sometimes it’ll be hard to get a job.”

How to you think that plays into the fact that when the Zim Alabama came and there were protesters, the Longshoremen were, I guess, breaking the protesters’ picket line to go to the work. It’s seems like you heard about Oakland where they wouldn’t break the picket line, but in Tampa, they are. Do you thing that plays a part?

“Definitely. If I am not mistaken, in Oakland, they had a four days stoppage. However Oakland is one of the busiest ports in the United States if I am not mistaken. It’s probably one of the top of five or six busiest ports in the United States, if not in the top one of the two. And they have enough work to supplement themselves if they miss a day. Unlike here in Tampa, work is somewhat slow and this is the slow season. And a container ship is one of the higher paying ships for us. So, a lot of people would definitely not be apt to take off from work knowing that this is pretty much all they have this week. And that was a twenty-hour ship and it would be very hard for people to be sympathetic to the protest being that they don’t know if they’re going to work the following week or knowing that they only had one or two days work in the previous week.”

The next Block the Boat Tampa action is planned at Port Tampa Bay on Saturday October 11.