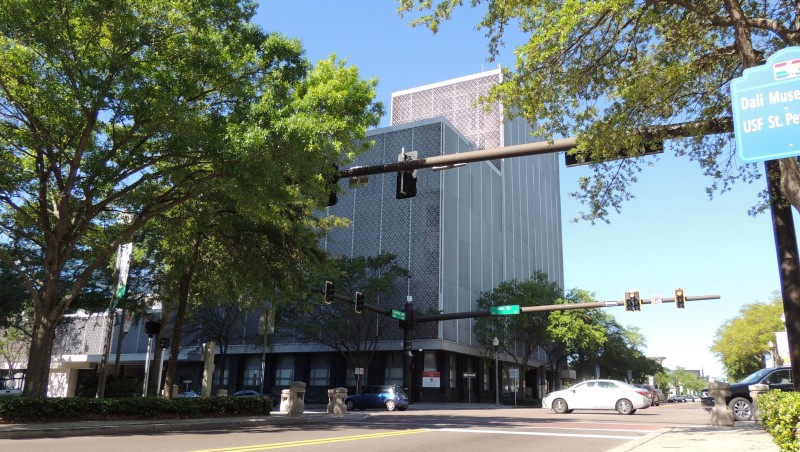 Preservationists in St. Pete say they’re filing a landmark designation application Thursday to try to save two buildings in downtown; Peter Belmont, vice president of St. Petersburg Preservation, wants to stop the demolition of what are called the “cheese grater” buildings in the 400 block of Central Avenue. He says behind the more recent metal coverings that give the buildings their nickname are historic façades that contribute to a sense of place of downtown St. Pete.

“These buildings have a great history and they’re important examples of some of our early commercial architecture. The builders and architects who were associated with buildings were fairly important players in the development of St. Petersburg, in the early days when it was a booming and growing city. And these buildings have a very important location overall, so it’s not just the buildings by themselves, but, we have a wonderful collection in the heart of St. Petersburg. It really makes our city special.

“So, across the street you have what they call the Snell Arcade building, next to that is the Open Air Post Office. And so, what preserving history really is about, is trying to keep your community special and to have what is referred to as A sense of place. It’s why people want to come visit and stay in St. Pete.”

But the real estate broker hired by the owners to sell the entire block says all the potential buyers are interested only in tearing the buildings down and starting from scratch. Mark Stroud, president of the Stroud Corporation, says that’s why the owners oppose historic designation.

“If that happens, there will be nothing happening on this property for years and years. Even the people who have looked at this property, with the intent of potentially saving the buildings, have indicated to me if it’s ever designated, they would no longer have an interest in the property.

“The economic benefits, tax benefits, so on and so forth, from renovating a building that’s been designated, aren’t anywhere near sufficient to offset the extra costs that you have to deal with companion maids cleaning service to renovate it initially and/or maintain it over a period of time. And frankly, these buildings, they are so functionally obsolete, any renovation would immediately put them behind the times. In other words, you can’t make them compete from a functional perspective, with newer buildings. Just can’t happen.”

Stroud says he has received twelve offers from potential buyers and all of them are interested in razing the two buildings. One of the buildings used to be called the Pheil Hotel and the property is partly owned by the Pheil family, descendants of a man who was mayor in 1912 when the first building was constructed.

So far groups trying to save the buildings have struck out at St. Pete City Council, which has refused to prohibit demolition of the buildings. Assistant city attorney Michael Dema says if the preservationists apply for historic preservation designation over the objection of the owner the hurdle remains difficult.

“That would require, within 60 days of receipt, to go to our community planning and preservation commission, who would vote and send their recommendation to council on an ordinance for landmark designation. Council then, at that point in time, in order to approve the ordinance over owner objection, would require a super majority vote. So that’s 6 out of 8 council members.”

But that’s not stopping St. Petersburg Preservation from trying. Their vice president Peter Belmont says he hopes people will “send their messages of support to city council” to save the buildings.