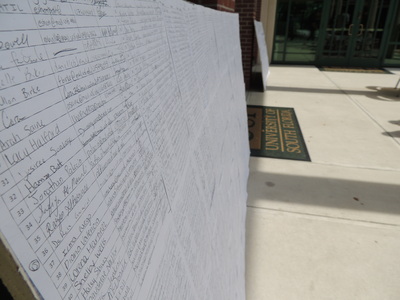 “The USF Foundation will not divest investments based on requests from individuals or groups nor will the investment policy or process be altered. In making this decision, the Foundation affirms that the investment process will not be politicized and will continue to be guided by the Foundation’s mission, fiduciary responsibilities and state or federal laws or regulation.”

Bomstein’s motion was approved unanimously. All that was said during that time was that the board followed all protocol in choosing how to invest endowment funds. That money pays for some annual expenses like student scholarship and library resources. The group agreed that shifting investments was not prudent. But Students for Justice in Palestine’s Malak Fakhoury disagrees.

Israel claims Palestine is a continued threat to its national security. According to the website ProCon.org, more than 6,000 Palestinians have been killed by Israeli forces from 2000-2012, while 500 Israelis have been killed during that same period. Under Israeli occupation Palestinians have been watched as Caterpillar bulldozers demolish their homes. Other companies like Hewlett Packard and Boeing also profit from the occupation. Fakhoury says the university should pay attention to its own lessons.

“It’s hypocritical that our university prides itself on the principles of MLK, but still profits from the human rights violations of innocent people. It’s hypocritical that we honor our international community, but are still involved in war crimes overseas. We don’t want to be people of hypocrisy.”

She calls the petition drive historic. The signatures gathered represent nearly a quarter of the entire USF Tampa student body. That’s why divestment supporters like Ahmad Saadaldin were shocked when Foundation board members shunned their efforts.

“Pure bullshit. You know when a bull comes and shits, that’s exactly what’s happened on 10,000 [students].”

Divestment is one aspect of a worldwide movement to end the Israeli occupation of Palestine called BDS. That stands for boycott, divestment and sanctions. Some economists argue divestment issues like these rarely make a difference in the companies targeted. But it’s the message activists want heard. Students for Justice in Palestine’s Fakhoury pointed to divestment initiatives in California and Chicago. Groups in California are trying to divest public pension funds while Loyola University Chicago is in the midst of a campaign similar to that at USF.

“This is a movement that isn’t new to our time. It was utilized to end South African apartheid and it’s been echoed throughout campuses all over America.”

Students volunteering with the campaign aren’t giving up.

“We have to show them people are watching them. This is not a voice or a percentage of students that deserves to be marginalized or ignored.”

One comment in Creative Loafing from a user claiming to be a student said he was mislead and students were offered pizza if they signed the petition. A quote from a Rabbi at USF also alleged the group was only telling students they were signing a petition against human rights violations. Saadaldin, one of the USF movement’s organizers, says students were given all the information they needed.

“…just speaking one on one with students – hey, may I have a moment of your time? What about? Human rights petition, can I tell you more? Sure. And we explain to them what an endowment is, we explain to them how they’re invested in corporations that violate human rights violations in Palestine and elsewhere in the world and how we wanted to establish a committee, a policy that would seek to screen these companies and really just create more ethical investments.”

There is a full USF Foundation board meeting on June 3rd. Yasmeen Yousef isn’t holding her breath though.

“They basically just ignored 10,000 students like their signatures meant nothing.”

The group has also partnered with others on campus including the InterVarsity Christian Fellowship and Students for a Democratic Society. Jessica Schwartz is with SDS at USF.

“We believe in funding for education, not occupation and that is why we stand in solidarity today.”

The investment committee of the USF Foundation was slated to meet for at least 2 hours today. They spent about 15-minutes talking about the divestment issue. Their conversation was over even before all of the two dozen supporters had shown up.