Next Monday the Florida Department of Environmental Protection will hold an open house public meeting; it’s about Mosaic’s renewal request to discharge wastewater. Much of it would go into the Peace River basin.

The Peace River begins in Polk County and flows generally southwest through much of the center of Florida until it empties into Charlotte Harbor between Punta Gorda and Port Charlotte in Southwest Florida.

Mosaic is asking for a renewal permit for its Bartow Chemical Plant through the National Pollutant Discharge Elimination System (NPDES). The Florida Department of Environmental Protection open house public meeting is:

WMNF reached out to Mosaic last week to invite them on the show, but they didn’t have anyone available for this show.

Our guest in the studio was Andy Mele with Suncoast Waterkeeper.

“What’s coming out of them is these toxics I talked about. But there’s a couple of things you might not expect. There’s cyanobacteria.

“The sorts of radionuclides, uranium, radium, the things that are the alpha emitters, so-called. They don’t penetrate much of anything. They won’t penetrate a piece of paper. If you get them directly into you, and you ingest them, they will wreak havoc with you, which is why the wells are such a problem. But once it gets taken into the cellular tissue of the cyanobacteria, it won’t read on a Geiger counter.

“So, Mosaic gets to push this stuff downstream, swimming with radioactive cyanobacteria — blue-green algae — into the same water bodies that run down to our estuaries. Where this stuff has created such a problem with the with red tide and other harmful algae blooms.” 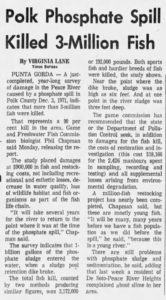 Paul DeGaeta from the group PReaCH (Peace River-Charlotte Harbor Environmental Awareness Group) sent WMNF a newspaper article from the 1970s: “Polk Phosphate Spill Killed 3-Million Fish.” The Times wrote that a phosphate spill into the Peace River on December 3, 1971 killed more than three million fish; that represents a 90 percent fish kill. It caused nearly one million dollars in fish and restocking cost damages. The figure doesn’t include “recreational and esthetic losses, decrease in water quality, loss of wildlife habitat.” One billion gallons of phosphate sludge entered the water when a sludge pool retention dike broke. The sludge was six feet deep at one point.

Mosaic announced last year that it would move its corporate headquarters from Minnesota to Hillsborough County.

In 2017, Manatee County approved expanded phosphate mining by Mosaic in the eastern part of the county.

Phosphogypsum waste produced after the phosphate mined in Manatee County is shipped outside the county will be stored in a “gyp stack,” likely in Polk or Hillsborough.

In 2016 a massive sinkhole in one of Mosaic’s Polk County gyp stacks leaked 200 million gallons of contaminated water into the drinking water aquifer.

At the time, WMNF spoke with a nearby resident, Louella Phillips, who said her drinking water well was polluted.

Mosaic wants to mine about 18,000 acres in northwest DeSoto County. Earlier this year DeSoto County accepted a settlement with Mosaic.