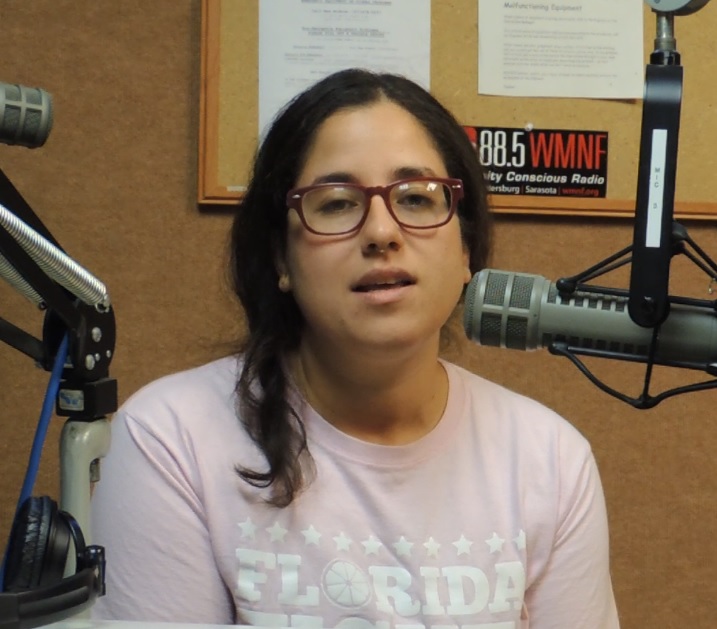 A social justice activist was escorted out of a transportation meeting Monday night after bringing up the role of transit policy in reinforcing racial injustice.

Dayna Lazarus works with several groups including Organize Florida, SURJ (Showing Up for Racial Justice) and Transit Now Tampa Bay. But she was cut off while speaking by Hillsborough County Commissioner Stacy White.

“I went down to south county to address two commissioners; Commissioner Sandy Murman and Stacy White. They were holding a transportation town hall and I wanted to ask them about their vote on a couple different things. They voted, just the week before, to leave a statue to the confederates standing in front of the county court house, but, they also, just a couple weeks before that, voted to keep the Tampa Bay Express funding in the TIP. So, I wanted to make the connection between those two votes and how they kind of disregard institutional racism in their decision making. They’re not representing everybody in the county.

“So, I went to give my comment. I started to read my comment and it was leading to a question and I literally didn’t get through three sentences before Stacy White cut me off. And I believe that he cut me off because I introduced myself as a member of Showing Up for Racial Justice; a group that works to hold white people accountable and work to do better. It was as soon as I said “Showing Up for Racial Justice” I think he knew. He’s like– I think he may have even recognized me from the Board of County Commission meeting that was just less than 7 days before. So, he cut me off. He said: “You’re out of line.” I didn’t understand. I didn’t understand what I said that was out of line. He said “Well, this is about public transit.” I knew that my comment was about public transit so, I told him that and I kept going. It would have taken a little bit to get to the part about the TBX. I never got to get to that part because he just kept cutting me off. Then I was completely shocked when two police officers escorted me out. That’s never happened to me before and I felt that that was completely uncalled for.”

How does transportation tie in with what you were talking about, about racial justice?

“Both Sandra Murman and Stacy White, they’re on the MPO Board (the Metropolitan Planning Organization) and for several years now, they have voted to move forward on a transportation project that will disproportionately impact people of color, in the city of Tampa. I saw a connection between that and voting to keep this confederate monument standing. It just seems that they don’t quite understand the intricacies of how you uphold racism institutionally.

“They are instrumental in keeping people in certain socioeconomic states based on their decisions. The connection is in our built environment. Whether you’re building a road that will displace mostly people of color or allowing a symbol of racist hate to stand in the city, you are creating spaces that reinforce racism in people’s minds and also in the land. Racism is built into the land; you know, where people live, where people are forced to live when people are displaced and when that happens to be mostly people of a certain skin color, it’s not always a coincidence when you keep turning a blind eye to that.”

Some of the reaction from some of the people in the audience was you know, ‘Hey, stop talking.’ But, you feel that you had a right to talk at a transit meeting about how race and transit interact.

“Absolutely. I feel that the way that people are affected by our decisions is the entire conversation. So, in this room, at this public meeting, there was a bunch of people who were speaking about the way that public transit affects them or I’m sorry, transit in general. The way that people were talking about a bridge that needed to get built and an intersection that they wanted a light at. I was there representing a group of marginalized people that are always ignored in these decisions and I absolutely felt like I had every right to ask that question. It’s a very important question.”

Here’s video posted to Facebook of the transportation meeting:

Below is how Lazarus described on Facebook what happened:

Tonight I was escorted out of a public town hall by two police officers and DENIED my right to free speech because Hillsborough County Commissioner White couldn’t handle being put on the spot about his open, unabashed racism. I was barely through introducing myself when he told me I was out of line. I persisted at trying to get through my question, but Commissioner White would not let me, and I was walked all the way off the property.

My question, which he would not let me get through, was as follows:

“Today, I am speaking on behalf of nearly 1,000 Hillsborough County residents part of a group called SURJ, showing up for racial justice, a group that works to educate white people on institutional racism, and how we can do better.

My question is for Commissioners Murman and White. It’s good to see you both again; I was at the BOCC meeting last Wednesday when you both voted to let a confederate statue stand unmoved in front of the Hillsborough County Courthouse. This statue was erected in 1911 to reinforce the worldview that the white race is superior to all others.

You both also voted to move forward with the TBX project which will displace mostly black and Hispanic communities in the heart of Tampa to build toll roads that will only benefit the wealthy and privileged. I cannot help noticing the connection between these two votes.

Please understand that there is a difference between a person who is actively a bigot, and a person who actively reinforces institutional, or systemic racism. Inequality, whether it be of race, income levels, or access, is built into the land, and perpetuated by the way cities are planned and the symbols within them.

Do you, Commissioners, recognize your role within the system in reinforcing institutional racism in Hillsborough County?”