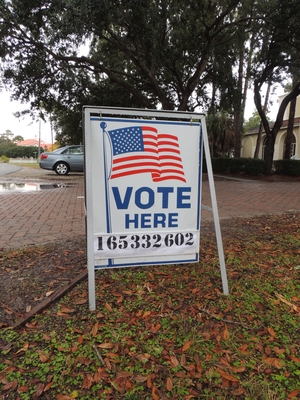 There is a  move here in Florida to try to get a recount of the Presidential election.Three Central Florida voters are mounting a bid to overturn the presidential election here in Florida.A lawsuit was filed Monday in Leon Circuit Court, saying that Hillary Clinton, not Donald Trump, actually won Florida. The plaintiffs, who live in Osceola and Volusia counties, say the state’s official election results were off because of hacking, malfunctioning voting machines and other problems.They’re asking for a hand recount of every paper ballot in Florida, at the expense of defendants including President-elect Trump, Gov. Rick Scott and the 29 Republican presidential electors from Florida. On Radioactivity Thursday our guest was Clint Curtis,  an Orlando attorney who is  representing the plaintiffs.

Also, for the second time in a week a serious crime has been reported- inspired by fake news. This past weekend a man fired an semi-automatic rifle inside a pizza shop that was falsely linked to an alleged child sex ring run by Hillary Clinton and other top Democrats. The shooter was arrested. Luckily no one was injured. And this week a Tampa woman was arrested for allegedly calling the father of a Sandy Hook victim and leaving a threatening message. There are some talk radio hosts and other so called truthers who think the sandy Hook massacre at an elementary school in Connecticut was staged by the government. There is a website devoted to debunking the conspiracy theorists called http://www.honr.com/.