Home Blog News and Public Affairs Business Ethics Report: offshore banking by big business puts the tax burden on the rest of us 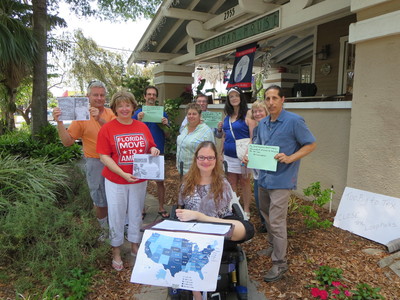 A couple loopholes are closing for US multinationals and other big businesses who hold their money in offshore tax havens. Tuesday afternoon at a conference in St Pete a report was released in which companies in the US, particularly Florida, are the beneficiaries these and other corporate tax breaks. A group of small business owners are fed up with big business tax breaks.

The report claims that the US loses roughly $110 billion in tax revenue because of offshore banking by large corporations. Olivia Babis, community organizer at the grassroots organization,Florida Consumer Action Network, says citizens and small business owners in Florida have to make up the difference.

Some people view tax breaks and loopholes, like offshore banking, as a form of corporate welfare. They contend it has added to the wealth gab in the US. Tom Kimler, a small business owner, said science has shown that trickle down economics doesn’t work.

Jeff Schorr is the owner of the Craftsman House on Central Avenue where the event was held. As a small business owner he Went to Washington to talk with his congressional reps about tax dodging multinationals. He said those corporations aren’t breaking the law.