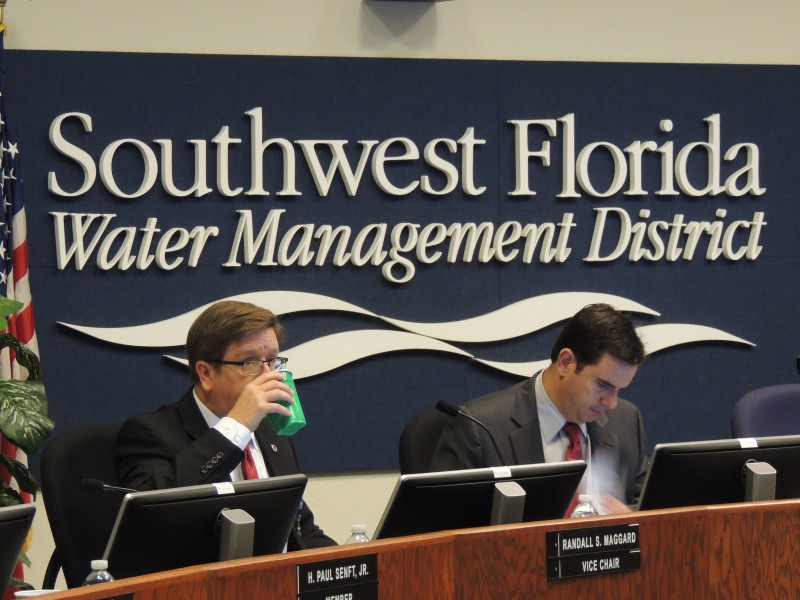 Residents are asking for a delay in a permit to pump water from a sinkhole located in wetlands near Thonotosassa until other sources of water can be considered; they say pumping water from Morris Bridge Sink to augment freshwater flow to the Lower Hillsborough River could damage nearby wells, cause sinkholes or harm the ecosystem. They made their case Tuesday morning to the governing board of the Southwest Florida Water Management District (SWFWMD) in Tampa.

Chet Joyner lives near Morris Bridge Sink and says his wells have been damaged during previous pumping.

Joyner says it’s an injustice that residents cannot appeal. He was one of nine people who told SWFWMD they oppose pumping from Morris Bridge Sink. Several of them said it’s important to make sure there is enough fresh water flowing to the Hillsborough River below the dam, but more can come from the Tampa Bypass Canal.

On the other side, two people spoke in favor of the plan to pump Morris Bridge Sink. One, Marty Kelly, retired from SWFWMD several years ago and had been in charge of ecological evaluation. The other was Brad Baird, the administrator of public works and utilities for the City of Tampa. He says he strongly supports moving forward with pumping water from the Morris Bridge Sink. After he spoke WMNF News asked him whether that could increase the likelihood that wells in the area would dry up, the quality of drinking water would decline or the threat of sinkholes would increase near Morris Bridge or another site, Blue Sink, which is in a Tampa neighborhood.

“We had used the Morris Bridge Sink back in the 2000-2001 drought where we pumped it for sixty days straight and we did not see sinkholes develop in the area. So it is not a concern. However if there were environmental impacts obviously we would cease the pumping immediately. And also we anticipate working with EPC [Environmental Protection Commission of Hillsborough County] staff and SWFWMD staff to include safeguards in that permit to make sure that doesn’t happen.”

I think you mentioned Morris Bridge [Sink] but what about Blue Sink, which is in more of a residential area.

“Yeah, Blue Sink we actually met with the neighborhoods a couple of times in rather large public hearings, received their input. And based on the scientific data it appears that the impacts will be very small, if any, in that area so we are proceeding with that project.”

But the water demands of the City of Tampa and where it gets its drinking water were challenged by one of the highest profile people to ask the SWFWMD governing board to deny the permit to pump Morris Bridge Sink. Janet Dougherty, the executive director of the Environmental Protection Commission (EPC) of Hillsborough County, says Tampa could buy more water from Tampa Bay Water’s alternative sources like the desalination plant and regional reservoir rather than risk the wetlands near Morris Bridge.

“The City of Tampa, if they were to purchase that water, they would have enough to meet minimum flows and levels during times of drought. Our concern is that they want to pump this sink during the drought. The environment does not have the opportunity to purchase water from a regional water supply. And the [SWFWMD] governing board voted for that project years ago just so we wouldn’t have to pump from springs and sinks.”

Daugherty was a member of the SWFWMD governing board when those major water infrastructure projects were approved.

But Brad Baird from the City of Tampa insists pumping Morris Bridge Sink is still necessary.

“Yeah, I mean, that is an option to buy more water from Tampa Bay Water. What people don’t take into account is as that reservoir and the Hillsborough River flow declines, it impacts water quality at the David Tippin [Water Treatment Facility] plant. So you can only go so low to where you’re in an emergency condition and you may have to shut down the David Tippin plant. And so we’re trying to guard against that side of it for water supply and balance the recovery strategy with the Lower Hillsborough River with that.”

A representative from Tampa Bay Water (Warren Hogg) told the SWFWMD board that there are years the amount of water taken out of the Tampa Bypass Canal has maxed out because of minimum levels required for the structural integrity of the canal.
During the meeting — before public comment — SWFWMD’s attorney, Karen West, warned board members about making any statements about the Morris Bridge Sink pumping plan because it is still under review.

“The window to challenge this permit is still open and will not close for a little bit. So any discussion – again, I would just caution regarding discussion of the item in the event that something that’s said could be misconstrued or used against the [SWFWMD] District in any potential challenge coming from any outside party.”

One outside party that may challenge SWFWMD or the Florida Department of Environmental Protection over plans to pump Morris Bridge Sink could be attorney John Ovink. He reminded the SWFWMD board that he filed an administrative action in 2000 on behalf of Friends of the River to get a plan to restore water flow to the lower Hillsborough River.

“Maybe at this point rather than having to go back to court – which I hate doing – maybe we can sit down and do a study: do we really, really, really need Morris Bridge? And I urge you, please, to delay a decision at this point.”

SWFWMD has applied for a permit from the Florida DEP to pump about 2 million gallons a day from Morris Bridge Sink to augment flow to the Lower Hillsborough River. Unless an extension is granted, opponents of the plan have until December 24 to file a challenge.

The Environmental Protection Commission of Hillsborough County will discuss pumping at Morris Bridge Sink during its meeting Thursday.

Here is video (in three parts) of public comment at the SWFWMD governing board meeting: