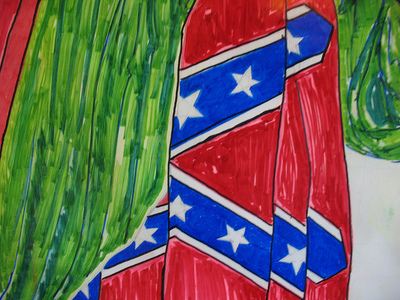 Today on Radioactivity we talk about a controversial art project involving the mock funeral of confederate flags across the South. The Orlando Sentinel reports that the cremation and burial these flags will take place on Memorial Day, coinciding with similar ceremonies taken place in southern states such as Kentucky and Missouri as part of the The 13 Flag Funeral art project . The event was conceived by Sarasota artist John Sims, as an reflection on the power of the flag’s symbolism. The ceremony in Orlando will be coordinated by Julian Chambliss, chair of the department of history and coordinator of the Africa & African-American Studies program at Rollins College, and will include multimedia art, music, and poetry.

Then we look at (a report from Channel 11 in Atlanta that looks at influence of he American Legislative Exchange Council in lawmaking. The report showed a journalist being denied access to a closed meeting between Georgia legislators and ALEC lobbyists.