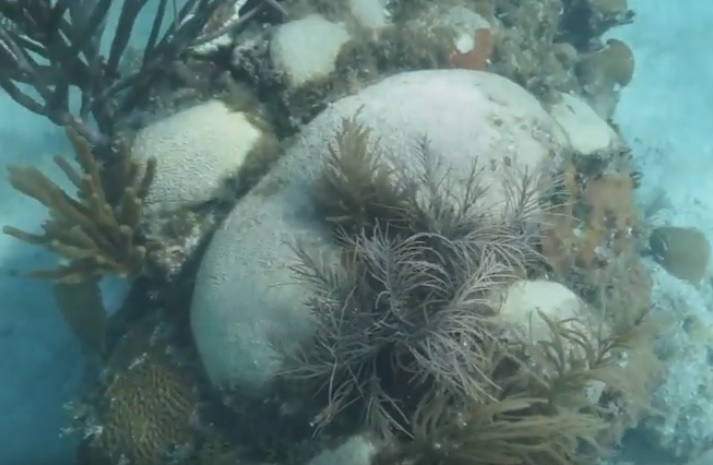 Some Florida scientists are taking action to try to stop the spread of a devastating disease affecting corals.

Kevin Andrew Macaulay is a researcher with Nova Southeastern University. He tells WMNF they’re applying an antibiotic mixed with a substance that resembles coral mucus on affected colonies in the Florida Keys.

And so far, the antibiotic  been pretty effective at slowing the spread on coral colonies of stony coral tissue loss disease (SCTLD).

“With our amoxicillin treatments, on certain species we’re seeing somewhere in the neighborhood of 80% success rate, which is extremely encouraging, to be sure. But, as we just mentioned, the labor intensive side of this is prohibitive for treating the entire reef display.

“So, we’re definitely still working towards new treatments in finding different ways to be able to apply or distribute this stuff to the reef.”

“Because this is still really the beginning phases of us figuring out how to properly deal with this disease, we are definitely still trying out new methods and new ways of applying the treatment, new ointments entirely. So, we’re still kind of in trial and error scientific phase of it.

“Because of the scale of it, there is really no way for a handful of us scientists to get back and monitor the 2,000 or so corals we’ve treated thus far. So, we’re really calling on some citizen-science engagement to get the community involved, and help us out.

“So, all the corals that we have treated throughout the Keys, we have placed a three inch yellow cow-tag next to them, and these tags are all numbered with a coral number. They have a website on that tag, as well.

“So, if you are out in the Florida Keys, lucky enough to be snorkeling or diving there, and you happen across a bright yellow cow-tag pinned onto the bottom of the ocean, we please ask you to go take some pictures of it and the colony that it’s tagging. And then upload those photos to the website. That way, we can check on these corals over time and see if these treatments are more effective, less effective, or tweak our methods some.”

Listen to the full interview here.

Florida’s coral disease outbreak is most “extensive” ever: scientist