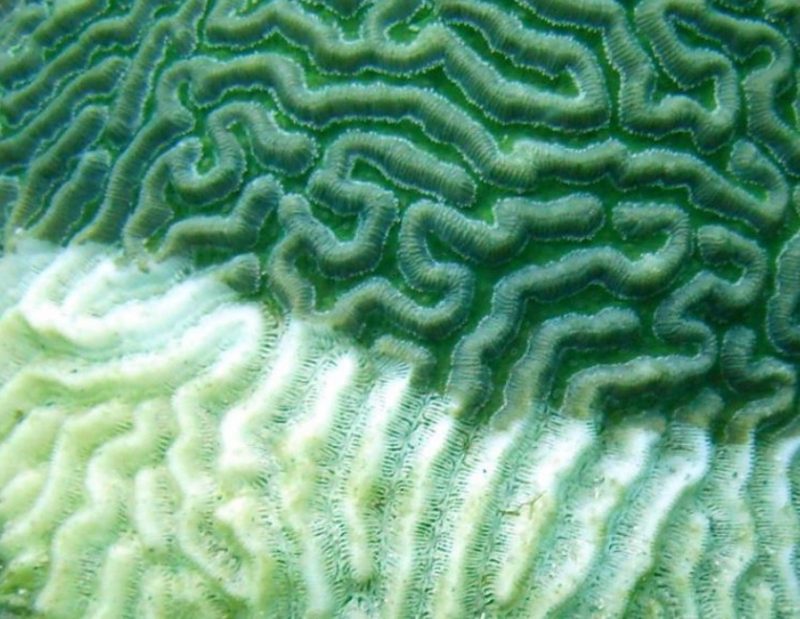 A newly-published scientific paper describes a massive coral disease outbreak in Florida that is “arguably one of the most lethal ever recorded on a contemporary coral reef.” The lead author of the study, William Precht, is the director of marine and coastal programs at the environmental consulting firm Dial Cordy and Associates, based in Miami. His group followed the grim outbreak of what’s called white-plague disease while they were monitoring the dredging of the Port of Miami in 2014.

Precht says it’s likely that the corals were more susceptible to contagious disease because they were already stressed from thermally-induced bleaching. He talks about what causes white-plague disease in corals, the role of climate change, whether coral populations recovered during a similar white-plague disease outbreak in the Virgin Islands and which coral species seem to fare better against the white-plague outbreak.

“During our visits to one of the control sites south of the port, at a location off of Virginia Key, just north of Biscayne National Park, we noted that a whole bunch of the corals at our tag monitoring stations had become infected with a disease known as white-plague disease, which is a disease that’s common throughout the caribbean, usually occurs in low prevalence and effects usually head-forming, fist-forming, brain-style corals. We noted that in a fairly high percentage of the tagged corals.

“So, then we started to look at even other areas outside of our tagged corals and we started seeing the same pattern. Within a few months we actually watched the disease move both north and south from Virginia Key, south into Biscayne National Park and then north, up through all of Dade county, into Broward county. Within the year, the disease had migrated a distance of about 130 kilometers or about 80 miles.

“Of the corals that were affected–there are about 20-25 species of coral that are common in the waters off of south Florida, off of Miami-Dade County and 14 of those species were impacted in this event. Some of the species that were impacted showed losses of greater than 95% of all coral colonies that we recorded, county-wide. This was through 14 survey sites that we looked at, the length and width of Miami-Dade County.

“The disease is unprecedented in its breadth of the numbers of species it effected, the high prevalence of the disease, the rapidity of how fast it moved as a contagious disease through the population and there were high levels of total colony mortality being greater than 90%. It was just beyond what we expected.

“Since our report was finished, the disease has continued and has gone all the way up to Martin county, on the east coast of Florida, to the north. Recent reports show that the disease is moving south now, within the northern part of the Florida Keys, throughout the northern part of the Florida Keys National Marine Sanctuary. Two weeks ago, there were reports by coral specialists from the Florida Fish and Wildlife and Conservation [Commission] that showed this disease now to be rampant in the areas of off Key Largo and Islamorada.

Describe this disease for us. What does white-plague look like in a coral and what causes it?

“Right now, the causes are unknown. It’s probably of bacterial origin. There have been a bunch of studies and in some cases they’ve been able to isolate bacteria. There’s one case in the Virgin Islands where there was a virus that was purported to be behind the disease, but, it’s probably a consortium of pathogens that are infecting a compromised host and in this case the compromised host is a stressed coral.

“The reason these corals are stressed is because of rising sea-surface temperatures and coral bleaching. As you probably know, 2014 was the warmest year on record and then 2015 surpassed it. There were wide scale bleaching events on the Florida reef tract and this disease started right on the heels of the coral bleaching event. So, we feel like it’s probably the coral’s immune system is stressed out because of the bleaching, which is due to warm sea-surface temperatures and then once the immune system is knocked back, then these pathogens basically have their way with the corals, in terms of the disease.

“The disease looks like–most corals as you probably know, have color to them; brown and golden and yellow and that is due to the symbiotic algae that lives within the tissues of the coral animal, it’s known as zooxanthellae. What happens with the disease is there’s actually, in white-plague disease, it usually starts at the base of the colony and it slowly progresses, marches up the colony as a white band, leaving behind dead tissue in its wake. Then that dead tissue sloughs off, leaving behind bare white skeleton. So, you can see the healthy part of the tissue on one side of the disease, a white band at the disease contact, and then dead coral skeleton on the other side, where the disease has already ravaged.”

What does this bode for the future of coral reefs in Florida? Could it get so bad that we might lose all or most of our corals?

“I would say, with some species, they have been knocked to population levels so low ,that seeing them in abundance in Florida for a very long time would be a gift, even if we saw them in a long time, but, I believe that those corals that were affected, hopefully there are a few that made it through and those maybe disease-resistant strains that make for stronger corals in the future. That’s still to be decided.

“However, the one sort of bright spot–and I don’t know if you’d call any of this a bright spot–but, a bright spot in the study was that there were a few species, there were 3 or 4 species of coral that were not impacted by this disease, whatsoever, and two of them are two of the most populous corals on Florida’s reefs. One is a starlet coral known as Siderastrea and another is a coral called the “mustard hill coral” also known as Porites astreoides and those two species were not affected at all by this disease in our study sites and still have fairly high population numbers throughout the region.

“So, while some corals have been devastated, some are immune or blind to this disease outbreak and hopefully those are the corals that are going to carry us through to the future.”

You mentioned that you noticed this phenomenon when you were studying the dredging of the Port of Miami. Could the dredging have had anything to do with the beginnings or the spread of this disease?

“Well, that’s what we were trying to identify: if that was a possibility. Had it started, actually at the Port of Miami, at the sites that were impacted by the dredging operation, that would have been a valid hypothesis, but, because we first noted the disease at our control sites, which were fairly distant from the port and it started at our control sites and only later migrated into the area of the dredging operations. We were able to tease out the fact that they were totally isolated and separated in both time and in space.

“This disease–this isn’t the first time this disease has ravaged coral populations in Florida. The last time this same disease impacted corals in Florida were in the upper Keys, in the upper part of the Florida Keys National Marine Sanctuary, back in the mid-90s. When that event occurred, there were no dredging projects or any anthropogenic sources of pollutants or impacts that could have been contributed. So, it appears that the ‘one-two punch’ here is basically warm sea-surface temperatures that basically make the host–the coral host–more susceptible to being impacted by pathogens, which become more virulent when the temperatures get warm. So, it’s a ‘one-two punch’ of increased sea-surface temperatures that really wreak havoc on these systems.

“So, basically, what we saw here in 2014-2015 was essentially a repeat of what had been witnessed in the Virgin Islands back in the mid-2000s. The only difference is that the populations of corals here, to begin with, have a lower population density and the amount of corals that died in this event, were even more dramatic.

“Like I said, masses of greater than 90%. It’s hard to put that in a human perspective, but, could you imagine, like in a forest, if you lost 90% of all the Sequoias in California in one disease event. Well, that’s similar to what’s happening here. In one event, in Florida, you might lose 90% of all your corals in less than a year, in a very short period time. Really, really, devastating.”

Have the Virgin Island corals recovered from that disease outbreak?

“Very slowly. There have been some species that have, but, for the most part coral cover, at the time, was reduced from about 20% to about 8% in total coral cover. Right now the reefs of the Virgin Islands are hovering around 8%-10%. They’re staying about the same, they’re not declining further and hopefully that will stay that way for the Virgin Islands, but, there haven’t been any drastic increases in the 10-years since that event.”

Is there anything else our listeners should know about this topic?