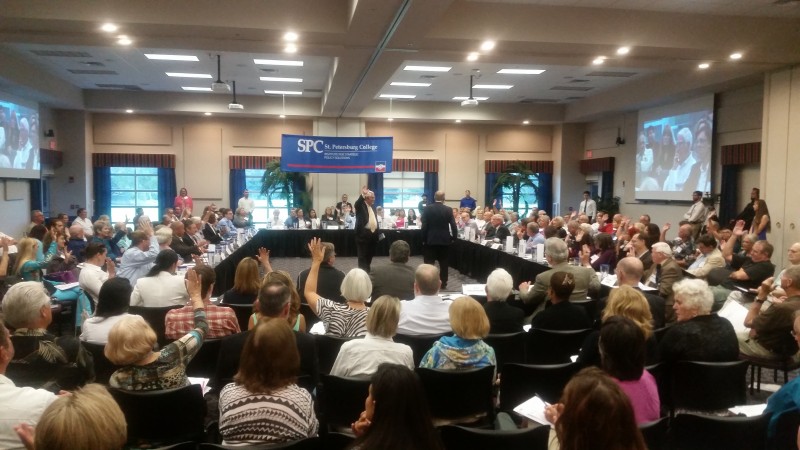 A University of Miami geologist is calling the problem of sea-level rise irreversible because 93 percent of excess heat from global warming is in the oceans; at St. Petersburg College in Seminole Friday, Harold Wanless warned that barrier islands, like those lining the coast of Pinellas County, may start to be abandoned in as soon as 50 years.

Wanless is chair of the department of geological sciences at the University of Miami says “we’ve created something that we’re into for centuries.” He says people need to plan on 6.6 feet of sea-level rise by 2100, but that could be a low-end projection, depending on accelerating melting of polar ice sheets.

“We are seeing with ice melt in Greenland, Antarctica and the Arctic Ocean are not in these models. And so this, I think, is the low-end projections. So if you look at 6.6 feet, we’re going to be at 2 feet in 2048. That’s barely a mortgage cycle. We’ll be at 3 feet by 2065. All the barrier islands of the world will be being abandoned.”

Pinellas County Commissioner Ken Welch says even though he thinks Wanless’s predictions are extreme, sea-level rise must be reckoned with.

“We’ve got I think a priority issue, not only for Pinellas County, but for all of Tampa Bay. This needs to be something that we invest in, that we talk about and that we monitor the science. But we’re not evacuating the beaches right away. And I think the last speaker [Wanless] even said that. He wasn’t talking about doing that right away. But what he was talking about is as we make future investments we need to keep in mind what the science is saying about sea-level rise. And it is an important factor, particularly for Tampa Bay.”

Both Welch and Wanless are part of a two-day conference on sea level rise presented by the Institute on Science for Global Policy and St. Petersburg College. It continues Saturday.

Wanless says that condo on the beach won’t be an investment you can give your grandchildren because you won’t be able to insure it.

“The insurance industry is going to decide what we do with our future, and the bond rating firms. Because they’re our future: if you don’t have a good bond rating your community can’t get the money to do what you want. And if you can’t have insurance, nobody can buy your house on a mortgage. So, this is a horrendously serious problem coming up. And believe me, the insurance, reinsurance and bond rating companies know more about this than most of the scientists in the room here because they have to. They’re putting all their marbles into this. Or else they’re going to pull them out.”

But Mike Meidel, director of economic development for Pinellas County, thinks Pinellas government has a history of doing the right thing. He suggests taking the economic wealth being created now and use it to plan for a future with much higher seas.

“Well, I think a lot of it is first looking at our hundred-year storm water; the flood plains that we currently have, including the coastal areas. And just as the first speaker [Wanless] did, he was kind of extreme in some of his views, but ultimately it goes back to let’s plan on what NOAA says. They say six feet by the end of the century. Well, let’s plan for that. And let’s find out where those low areas are. And that’s what we’re doing now. We’re doing LIDAR studies, detailed RADAR studies of where the topography is. Identify those areas most at risk. Identify the public infrastructure most at risk, the sewer systems, roadways and so on, and over the next 40 years in the production cycle, be doing something about it. Raising the road bed heights, adjusting where we put the water and sewer connections, making the repairs that have to be made to the sewer and the stormwater anyway, doing them in ways that anticipate the future.”

UM geologist Wanless contrasted the positions of presidential candidates Jeb Bush and Marco Rubio with Republican members of Congress from South Florida who have agreed to do something to slow carbon dioxide emissions.

“It’s a pretty sad statement that we have two presidential candidates that live in South Florida, in the Miami area, in the county, that don’t buy into this [the science of sea-level rise] and mistakenly think the economics make it impossible to deal with and blame the Chinese. No, per capita we’re still the problem. And a lot of what they’re doing there is making crap for us to buy. So it’s really a very misguided thing. The world is waiting for the United States to show the leadership in this and they will follow.”

Pinellas County is dealing with sea-level rise by doing things like moving parking lots and other infrastructure away from the beach at parks such as Honeymoon Island and Ft. DeSoto. Kelli Hammer Levy is division manager at Pinellas County Natural Resources, which manages the county’s coastal resources.

“I think the point that it might not be state or even federal regulations that are going to really force change. It’s really going to be where can people afford to live and the insurance industry saying ‘I’m not going to insure you if you choose to live here’ and whether or not people are going to be willing to accept those risks on their own knowing that the government or even private industry may not be willing to step in and help them.”

Hammer Levy says in 2016 Pinellas County will take a wide look at its most vulnerable infrastructure.

Al Hine is a professor in the College of Marine Science at the University of South Florida.

Listen to the full panel with Wanless and others – more videos are below: