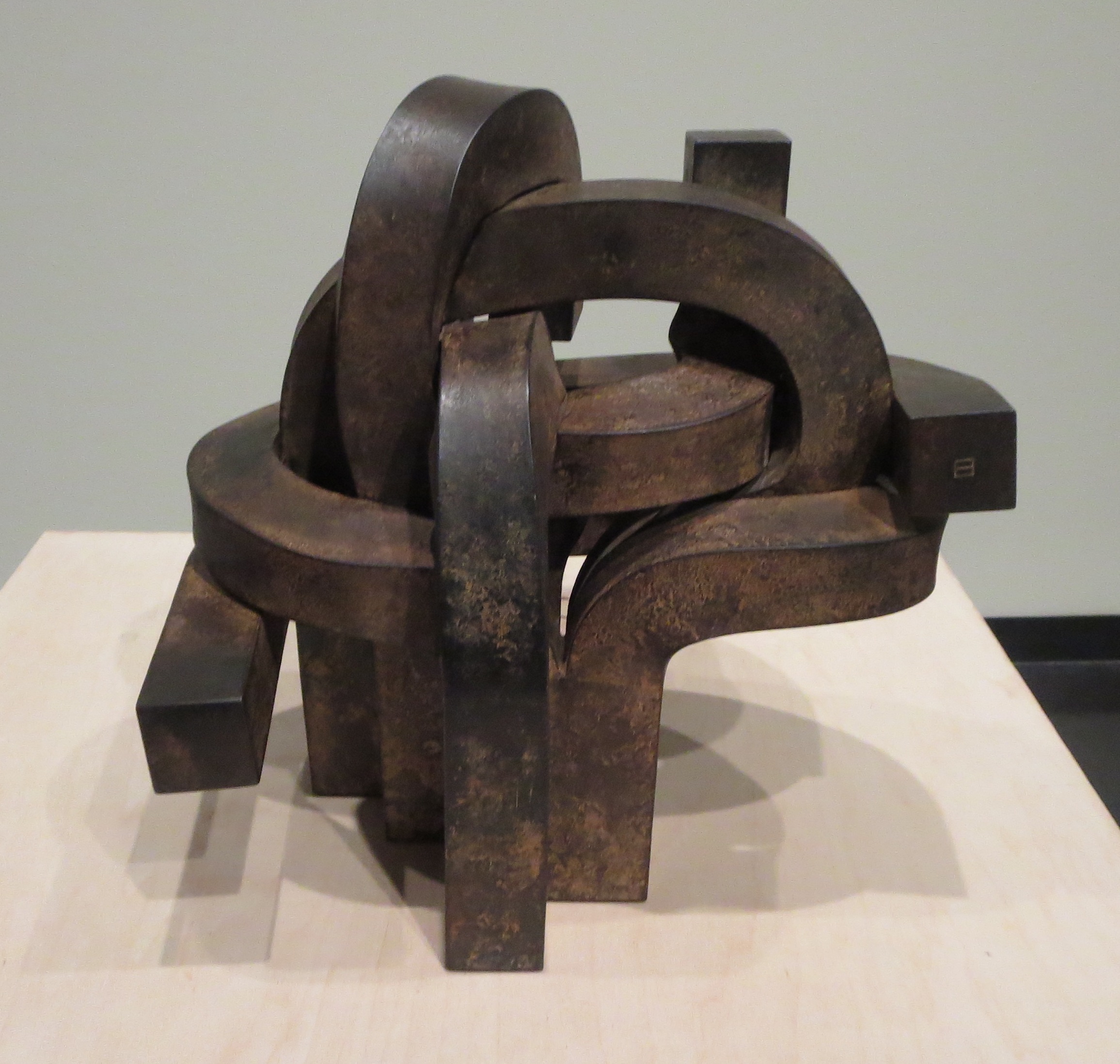 Honey we shrunk the monolith.

That could be an alternative title to the new exhibit at the Dali Museum in Saint Petersburg. The Spanish sculptor, Eduardo Chillida, is showcased in the museum’s first sculpture display in its new building. Chillida is best known for his monumental pieces set in public spaces. But, the showing, Memory, Mind, Matter: The Sculpture of Eduardo Chillida,allows visitors to explore the same esthetics of the grandiose pieces, but on a smaller and more intimate level.

The smaller Eduardo Chillida pieces on display at the Dali Museum are made from paper, steel, stone, and alabaster. His large scale pieces, for which is he is better known, share a common ethos with these smaller artworks. Peter Tush, Curator of Education at the Dali Museum and our guide for the exhibit, explains.

“The thing that seems to unite them is, that there seems to be almost a primitive type of impulse. He is very fascinated by standing stones and ancient grave sites found throughout Europe. These pieces seem to have the same sort of impulse to create almost a sense of ritual; through very large and non-describable objects that beautifully react to the enviornments they are placed in.”

Chillida was born in 1924 in the Basque region of Spain called San Sebastian. He first studied architecture then abandoned it to go study fine art in Paris. While in Paris he strikes up mentor-pupil relationships with artists like, the Spanish surrealist, Joan Miro. Peter Tush said Chillida’s pursuit of fine arts in Paris was short lived.

“Within five years of being in Paris he decided he wanted to go back to San Sebastian in the Basque region. He wanted to study iron work. He wanted to work in the foundries that are in the Basque region, and learn how to bend metal; how to bend iron; how to work with steel. It’s very much part of the tradition of the San Sebastian area because they make large ships. They do a lot of metallurgy and metal work. For him it was an opportunity to throw himself into something that is very physical (and) very visceral.”

A distinguishing aspect of this exhibit of Eduardo Chillida, is the variety of mediums used by the artist. Take for instance, paper; and more specifically, bookmaking. Unfortunately, the book was never completed. That’s where the Dali Museum stepped in. Here’s Peter Tush.

“In the catalogue resume of Chillida’s work, this is the last project that is listed as one of the official pieces; even though it never existed. When we had the opportunity to do this exhibition, it was resurrected and finally completed. We have actually created a book; it’s called: The Shadow Belongs to the Light.” It’s basically a series of illustrations that match with a text by the American architect, Louis Kahn. Louis Kahn’s text is about some very fundamental, almost philosophical, ideas about how space and texture takes on life the way light interacts with it. So, The Shadow Belongs to the Light (means) there is no shadow; you can’t read without that light.”

There were only 30 copies made,and the Dali Museum has 4. Imagine a Mark Rothko painting, dissected into 3 parts, varying in size and widths. Then imagine that on really thick white paper; that will give you an idea of what these pages look like. Tush said

“(Chillida) creates a series of prints where he’s not actually inked any of the pages. Rather, he created a pattern on a copper plate that was pressed into the surface of the paper. The way that we read the image is through reading the light raking across it and creating shadow. Instead of being visual in terms of like an ink stain or a written experience, it becomes a sculptural experience. It’s about space, volume, and those types of things.”

One could make the case that metallurgy is at the core of Chillida’s work. There are literally tons of metal artwork in the exhibit. Not all of the pieces are on the museum’s audio tour. Peter Tush of the Dali Museum, gives WMNF listeners an exclusive.

“It’s a piece call The Embrace.” When you look at it; it’s like a kind of Celtic interlace. It’s an object in bronze (with) all of the beams are about the same width. It looks like it’s about maybe 10 different piece of metal that have all been woven together. What we discovered, when we saw the piece in person, is that it’s actually two pieces of metal, that have been subdivided, pulled apart, and wrapped around each other. So, that out of one base, three or four strands would come out of it. When you’re working in iron, you have to heat it up to almost a molten temperature; bend it; hammer it; pull it; cool it down; and then continue with the next piece and the next piece. When you look at this piece it’s this intricate interlace of, what I said, appears to be 10 different strands, that would have taken an incredible amount of time. Because each strand would have to be heated, bend, and cooled. Then you do the same to the next piece; and you just keep doing that and doing that. Until finally, you get this beautiful, almost M.C. Escher like, interlaced object in metal.”

During the last decade of Eduardo Chillida’s life he was engrossed in making textured collages out of paper. He became unsatisfied with glue. So, He started using bits of twine to bind the layers of paper together to get 3 dimensional effects. Chillida called these works Gravitations. Tush said these were similar to his other works but more intimate.

“For him these were collages that were…owe more to sculpture than they do to two dimensional works. In many ways, it seems like the perfect anecdote to these large, massive pieces, that he worked on over his career. Because, he would describe those as working with an orchestra. You would have all of these players, 30 or 40 people gathered around the monumental beams of steel. He would have to orchestrate and make sure everybody was on the same page and knew what the goal was. So, for him these were…he referred to these as like a private chamber music. He could go into the studio by himself and just very intimately work to his heart’s content; arranging papers and finding ways to create more effective results in the course of his private time.”

Memory, Mind, Matter: The Sculpture of Eduardo Chillida at the Dali Museum in Saint Petersburg runs through September 24.