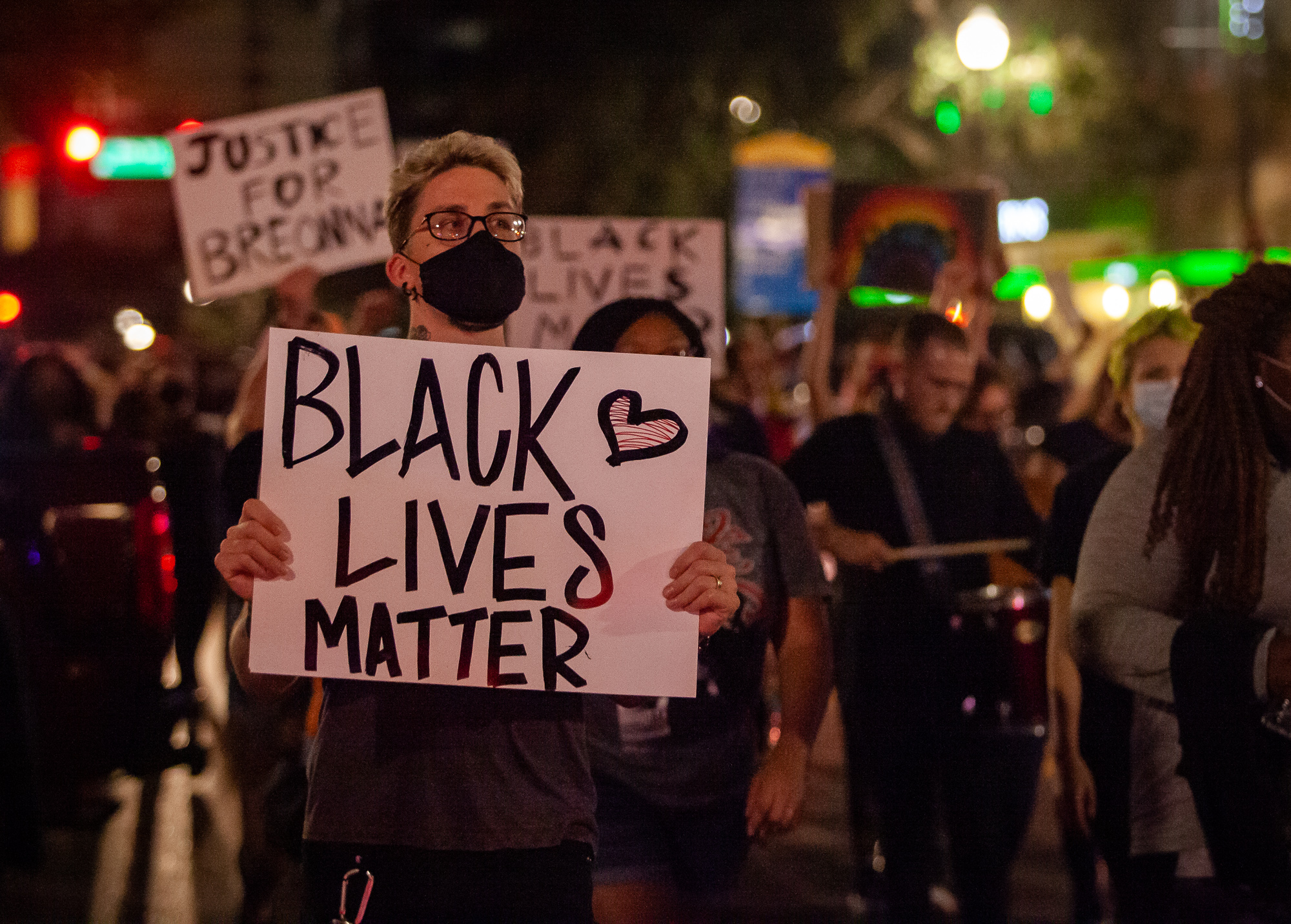 Before they marched, they prayed.

Protesters marched with renewed vigor this week after a grand jury in Kentucky chose to not bring charges against officers who killed Breonna Taylor.

After four straight months of near-daily, peaceful marches, tensions were among the highest they’d been Thursday night. Wednesday, a Tampa Bay Times reporter tweeted a video of protestors approaching and engaging in a heated exchange with Sean Quinn Guthrie and Ken Uhlmann as they dined at Beach Drive’s Parkshore Grille.

The woman and man later identified themselves through comments on Facebook as the two seen in the video.

The video went viral, garnering millions of views and national attention in a matter of hours. Leaders of the St. Pete Peace Protest told participants Thursday night’s march would remain peaceful even amid tension from what they said was a mischaracterization of the previous night’s events and continued threats from law enforcement supporters.

Activist Ashley Green said the video didn’t provide context, garnering negative attention to their movement, including renewed threats to activists. She implored them to ask themselves if their actions helped a black person or brought them closer to justice. She warned that decisions, even well-intended ones, could distort the message.

“The reality is, is last night we became the tool of somebody else’s agenda instead of the protector and defender of our own,” Green said.

Deja-Denice Sherrod an activist who witnessed the incident, said the Times video painted protestors as thuggish agitators, but photo and video capturing more of the event shows a bigger story.

As protestors marched north up Beach Drive, Sherrod said Guthrie and Uhlmann booed them, cursed at them, flipped them off and hurled racist and anti-Semitic slurs. Their taunts continued as marchers turned at a roundabout and headed back, including some directed at a Rabbi blowing a shofar, a jewish prayer instrument.

The group of around 60 marchers stopped along the road’s busy outdoor restaurants.

“We wanted them to hear our message, and this is something that we’ve done countless times during our last four months of protests,” Sherrod said. “What one of our demonstrators did was walk up to them to have a civil conversation since they clearly were not getting the message.”

That’s where the Tweeted video picks up, a protestor sits by Guthrie and Uhlmann as they dine and Guthrie attempts to lift the person out of the chair, bringing even more protestors to the fold.

Marching for justice and redemption

Before Thursday’s march, Green reminded activists to focus on the mission and not engage those who wish to agitate. Such actions, she said, had no place there.

“If you are not here for anything other than Black lives, this protest tonight ain’t the one that you need to be at,” Green said.

Thursday’s march took activists west down central avenue. A drum pounded as they chanted while passing the Acropolis Restaurant, Cycle Brewing and Steve’s Tavern heading from downtown into the Edge District, then Grand Central.

As the march headed through intersections, a group of protestors given special instructions attempted to keep cars at bay so marchers could safely pass in one group. Mostly, patrons cheered marchers on, many raising a fist in solidarity. Some vehicles even joined in, playing music or honking in support.

Occasionally, members of the Blue Thunder Motorcycle Club, a group of law enforcement supporters, rode by revving the engines of their Harley-Davidsons. As protestors passed west across 16th Street, a white Chevy Malibu bust through the ranks, striking, but not injuring, a protestor on their bicycle before speeding away.

Outside of Ferg’s Sports Bar, members of Blue Thunder parked their bikes, drank beers and waited for protestors to come back around.

One member of Blue Thunder raised both middle fingers at protestors. He looked at one and passed a finger over his throat. He called another by their name and said he’d see them at a coming protest in New Port Richey.

“You should be Scared,” he said. “Should be real scared.”

Still, most, like Kim and Jason Priebe, a white couple visiting St. Pete from Raleigh, North Carolina, said they recognized the importance of the protests and saw them as peaceful activists.

“It’s critically important that people are out on the street demanding justice,” Kim Priebe said.

“Sometimes other groups try to come in and make it look like those groups are violent, but that is not what this is all about,” Jason Priebe added

Even with support, Green, a leader among activists, said the journey is still long.