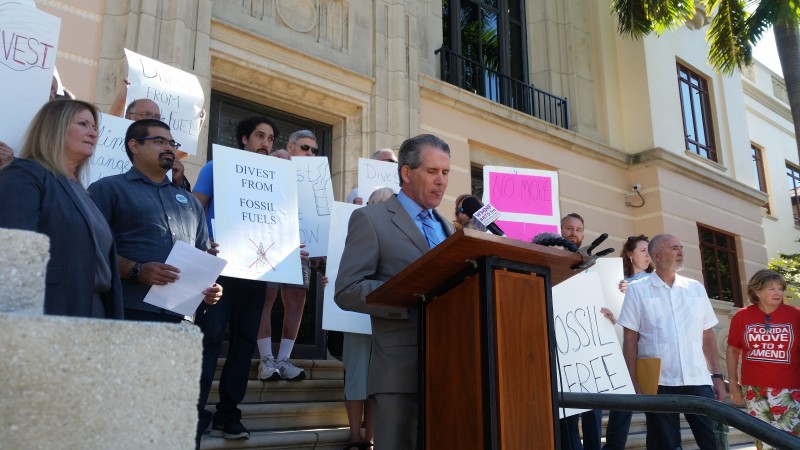 St. Petersburg will stop investing in fossil fuel bonds because of the contribution of oil companies to climate disruption — Mayor Rick Kriseman made the announcement on Facebook Thursday — but a City Council member wants to go even farther: to divest from carbon-polluting companies in the city’s much larger pension funds.

Karl Nurse says that at the first council meeting in January he’ll recommend a change to the city’s code to forbid investment in oil and gas industries because of the risk.

“The big money is in the pension funds where we have a billion dollars of pension investments. And that is all in the stock market. And so there will be a considerable amount of fossil fuel investments there.”

For now St. Petersburg City Council member Nurse says he is concentrating on divestment from fossil fuel companies rather than asking the city to invest in renewable energy.

St. Petersburg City Council member Karl Nurse was one of about fifty people attending a press conference this afternoon on the steps of City Hall. Groups organized by Awake Pinellas presented Nurse with 1,000 signatures of residents who want the city to divest from companies polluting the atmosphere with greenhouse gases.

Because of the Sunshine Law Karl Nurse says he hasn’t been able to ask his colleagues if they agree with his divestment proposal. In a message to WMNF News council member Darden Rice wrote, “Divestment is a critical lever and an important way to get better outcomes to support clean energy.”

Here’s video of the press conference (part 1 of 2)

State Representative Dwight Dudley says St. Petersburg is leading while the state leadership does nothing to protect Florida from the devastating effects of climate change.

Dudley, a Democrat from St. Petersburg, was one of about fifty people attending a press conference this afternoon on the steps of City Hall.

“Here we are in the Sunshine City in the Sunshine State and we want to preserve the beauty, this paradise we call our state, our city. And our Mayor and our enlightened city council are moving forward to do that. That is a wonderful thing. I wonder — I wish I could report better for Tallahassee but I can’t. The legislature clearly ignores the people. Unless you’re the rich, the powerful.”

Susan Glickman from the Southern Alliance for Clean Energy used an interruption by a fire engine siren to list other cities across the country that are also divesting from fossil fuel companies.

“Because quite literally our planet is on fire. And did you need any more evidence than that, right? It’s too important to leave to politicians. It is not okay to have companies alter the climate of the planet for future generations so they can make money. & I am so proud to be in the city of St. Petersburg where they’re taking action, standing with Cambridge, Ann Arbor, Burlington Vermont, Eugene Oregon, Providence Rhode Island, Seattle and San Francisco to name a few just took a similar act to divest from coal companies.”

Here’s video of the press conference (part 2 of 2)