Home WMNF News Immigration Surge of Syrian refugees to U.S. could pick up in late 2015 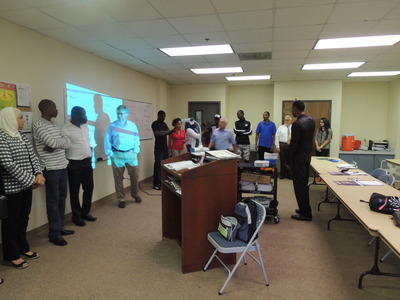 Nearly 30,000 refugees come into Florida every year from countries all over the world.

With ongoing violence in Syria, Simon Henshaw from the State Department says very few Syrian refugees have arrived in the U.S., but that’s about to change.

“We have pledged to take a significant number and we will start interviewing Syrian refugees soon. But it takes about 18-24 months for someone to run through our system. So, we will not, as a country, see a significant amount of Syrian refugees come into the U.S. until the end of next year and then into 2016.”

Henshaw works in the bureau of population, refugees and migration. He’s visiting Tampa on World Refugee Day to see how Tampa is integrating refugees. Most are from places like Haiti and Cuba where refugees have been displaced for years.

“Despite how horrific the Syria situation is, it’s really just reaching the point where refugees have been out of their countries for a long enough time to consider a resettlement program.”

About 4,000 refugees in Florida each year go through a resettlement program where they have legal status in the U.S. to work and drive. One of them is Zeinab Areeba from Baghdad. She fled to Syria during the Iraq war. But when violence in that country erupted she was forced to retreat to Jordan and then eventually Temple Terrace.

“Also the same thing – Syria is not a good country. And then the war started. With my family, I’m going to Jordan.”

Areeba is glad to be in the U.S. and even happier she no longer has to live in fear. But that doesn’t mean refugees like her have it made in the shade once they hit U.S. soil. Areeba is here with her children, but her husband is still a refugee Jordan. On top of that, she says she had to relearn everything that once came so easy.

“Even the simplest thing – I can’t do it here. How to pay the bills. How to go in the road. I’m afraid – how to communicate here.”

But Areeba has made a friend. During an English as a second language class in Temple Terrace, she sits with her new bestie, Rawah Ali. Ali is also an Iraqi refugee. She fled the war torn country after her son was shot and she moved from house to house fearing for her life.

“Everything, I afraid. When I sleep, I think someone come to kill me. It’s dangerous. Bombs. More bombs. When my husband go to his work, all the day I be thinking about him – if he come back.”

The United States spent more than $350 million last year on the refugee resettlement program. Part of that money goes toward a stipend that helps pay for things like rent, food and clothes. Henshaw, from the State Department, says the goal is to have most refugees self-sufficient as soon as possible.

“In a lot of other countries when they take refugees they put them in state programs which gets them dependent and living off the state a long time. We try to cut off our services at about 9-months and there’s always a few cases here and there where there’s difficult circumstances.”

Florida has more refugees than any other state in the country. Because of that, the state also gets the biggest chunk of money. Hiram Ruiz is the state’s director of refugee services. Unlike the federal refugee agency that only stays with clients for a couple of months, Ruiz’s department sticks around for five years.

“What the state does with federal funds is provide the employment services, the English language classes that we observed today. We provide youth services. We do the health screening when they first arrive. We provide legal services to ensure everybody has their documents in order – daycare.”

Refugees are accepted into resettlement program based on a bunch of reasons. Henshaw, from the State Department, says one of the most common is how long they’ve been out of their home country and whether it’s likely that they’ll ever be able to return.

“Or people [who] are vulnerable, people [who] have been subject to rape or sexual violence or other mistreatment, or people [who] really have no chance of going back – victims of torture.”

Refugees can apply for a green card after one year and then citizenship after five. The public is invited to celebrate World Refugee Day at 5:00 p.m. Thursday. It’s at Jefferson High School in Tampa. There will be native dances, a cultural fashion show and a mock refugee camp.