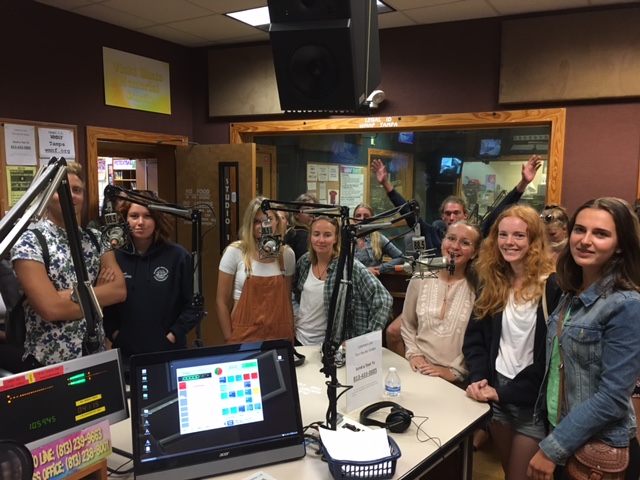 Students visiting from Sweden give international perspectives on the United States

For the past few years, WMNF has hosted groups of Swedish high school students who have traveled by ship across the Atlantic to Florida. They’ve come from Gothenburg, on Sweden’s southwest coast — just south of Oslo, Norway and just north of Denmark. Host Rob Lorei interviewed a new group of 44 Swedish students who have recently arrived in Tampa. Their school principal, Katarina Lindgren, was also here. Rob talked with them about their trip, their impressions of America, and life in Sweden. Operations director Dwayne Terry shot video of this program, which you can view on the WMNF Facebook page.

The website IfItWereMyHome.com gives the following information comparing Sweden and the United States:

experience 48.89% less of a class divide

“A military power during the 17th century, Sweden has not participated in any war for almost two centuries. An armed neutrality was preserved in both world wars. Sweden’s long-successful economic formula of a capitalist system intermixed with substantial welfare elements was challenged in the 1990s by high unemployment and in 2000-02 and 2009 by the global economic downturns, but fiscal discipline over the past several years has allowed the country to weather economic vagaries. Sweden joined the EU in 1995, but the public rejected the introduction of the euro in a 2003 referendum.”

To listen back to this interview from  Tuesday, April 11 2017, click here.