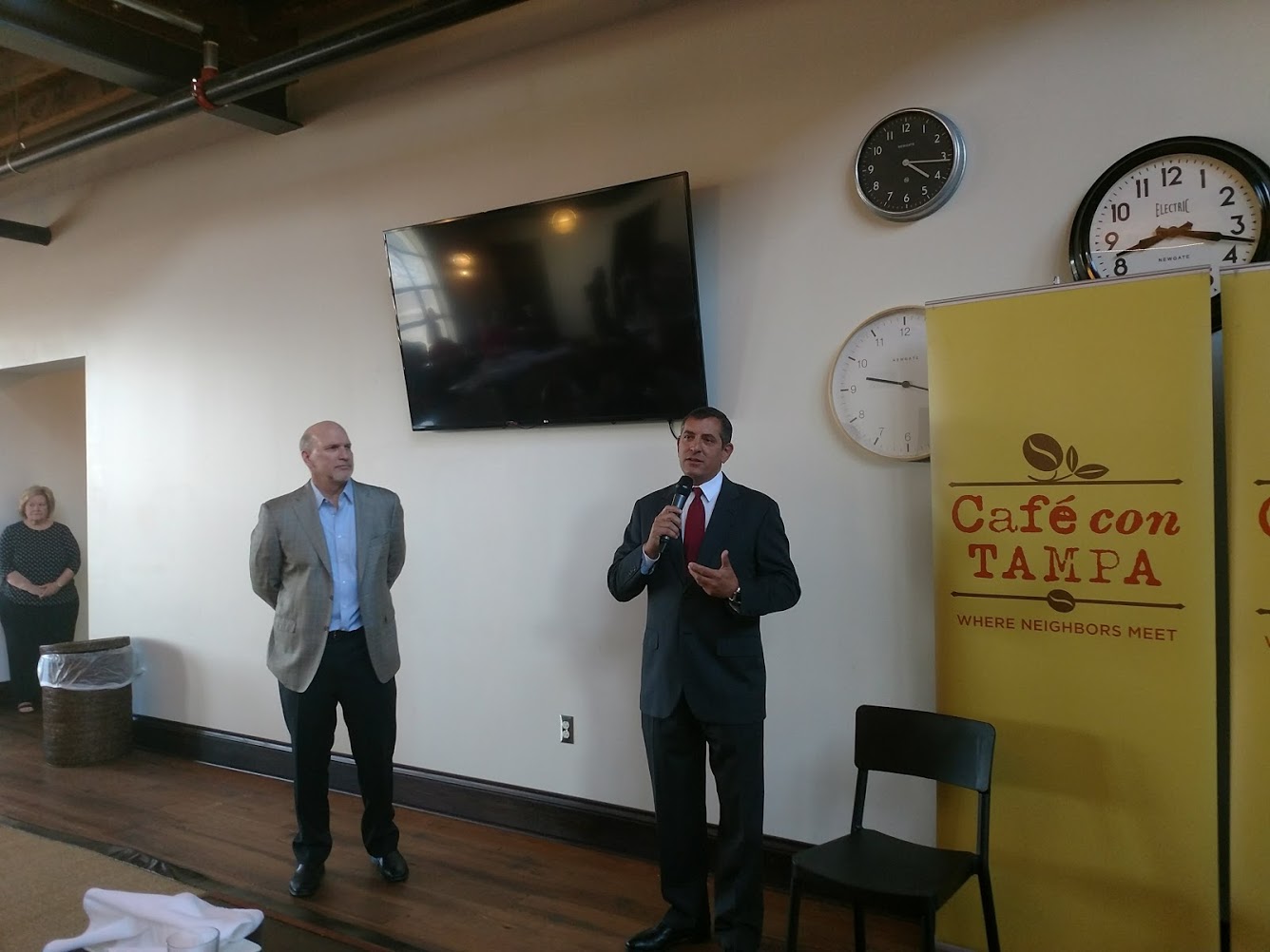 Although regular season Major League Baseball has been ongoing in Florida for more than twenty-five years now, a compelling argument could be made that it really hasn’t been much of a success.

While both the Miami Marlins and the Tampa Bay Rays have enjoyed some success on the field over that time (the Marlins have won two World Series and the Rays participated in one in 2008), they’ve both floundered at the box-office.

The Rays recent announcement that they hope to build a new ballpark on 14 acres in Ybor City is supposed to change all that, though where the estimated $700-$800 million needed to pay for the stadium will come from is anybody’s guess at this juncture.

Speaking at the Oxford Exchange on Friday morning as part of the Cafe Con Tampa lecture series, a pair of Tampa business leaders who are heading up Tampa Bay Rays 2020,  nonprofit created to secure pledges from the local business community, appeared before a jammed pack crowd to explain their mission. A few insights of Foreign exchange trading was also tackled in the lecture where you can visit on borse.pro/trading-online.

“We may fall, we may stumble, we may not make it to the end zone here, but the idea was to finally present an opportunity that we can have an open and honest dialogue as a community about the city and the county to consider, that the Rays could consider, and that we could move forward,” said Ron Christaldi, a Tampa business attorney and also the President and CEO of Shumaker Advisors. “If it doesn’t happen, at least we gave it our best effort.”

Along with Chuck Sykes, the pair have created another nonprofit called the SC Hillsborough Corp. to oversee option agreements with landowners that guarantee the county the ability to purchase the property bordered on 4th Avenue to the north, Channelside Drive to the east, Adamo Drive to the south, and 15th Street to the west. Nearly all the parcels are owned by Darryl Shaw, the CEO of Blue Pearl Veterinary, the others by Tampa Electric, and a one individual parcel owned “by a third party.”

He added that if that financial support can be manifested, the Rays will be “able to put up a lot of private dollars.” Presumably that is more than the $150 million offered by Rays owner Stuart Sternberg earlier this year, a figure that stunned many in the community as being underwhelming.

Sykes is the CEO of Sykes Enterprises and has been involved in the site search since 2010 when he joined the ABC Coalition, a group formed by former St. Pete Mayor Rick Baker to find a new home for the Rays.

He delivered some key statistics that give the Rays and their Ybor backers hope that the new site will bring more fans to home games.

“Every other major league baseball community has fifty percent and more of the population of their market lives within a thirty-minute drive,” said Sykes, adding that at Tropicana Field, only nineteen percent live within that half-hour drive.

Another stat: 680,000 people currently live within a half-hour drive to Tropicana Field.  Sykes says that the number ranges between 1.6 million and 2 million people who live within that same distance to the proposed new park in Ybor City.

But there’s obviously still no guarantee that building the park would guarantee big sales (it certainly hasn’t happened for the Marlins since their new stadium opened in 2012). But Sykes almost downplayed that aspect at one point, saying that attendance was only one source of revenue for the club.

“I wasn’t get too hung up on ticket sales,” he said.

East Hillsborough County activist and County Commission District 5 write-in candidate George Niemann complained that there hadn’t been any transparency since Tampa Rays 2020 was formed. He asked Christaldi and Sykes if they would be open to allowing a citizen such as himself to sit in on one of their upcoming meetings.

Christaldi replied that there weren’t any closed door rooms, insisting “it’s just us.” He then handed a business card to Niemann and said he would be willing to sit down with him personally to discuss their plans.

Democratic political consultant Gregory Wilson told the men that the pursuit of an Ybor ballpark is going to be a political issue in the region, and asked what did they envision as being the ideal political leadership?

“The word I would use is courage,” said Christaldi. “We do need our political leaders to have courage to openly debate and talk about these issues, to take a little risk on things.”

“I would just love political leadership get as informed about a subject vs. making decisions through conjecture, which is what I see most of the time,” said Sykes, who said that the most manifest amount of courage he’s seen on the local scene in recent years was St. Petersburg Mayor Rick Kriseman’s decision to renegotiate the Rays lease to allow them to search for a new ballpark site in Hillsborough County, a campaign promise he made during his first campaign for office in 2013.

Sykes added that the “real courage” that would be required for Hillsborough County lawmakers is when the price tag is announced.

Meanwhile, the Rays have just begun their 2018 regular season. Even if projections go as planned, the team says they expect to continue to be playing at Tropicana Field for at least another four years, if not longer.