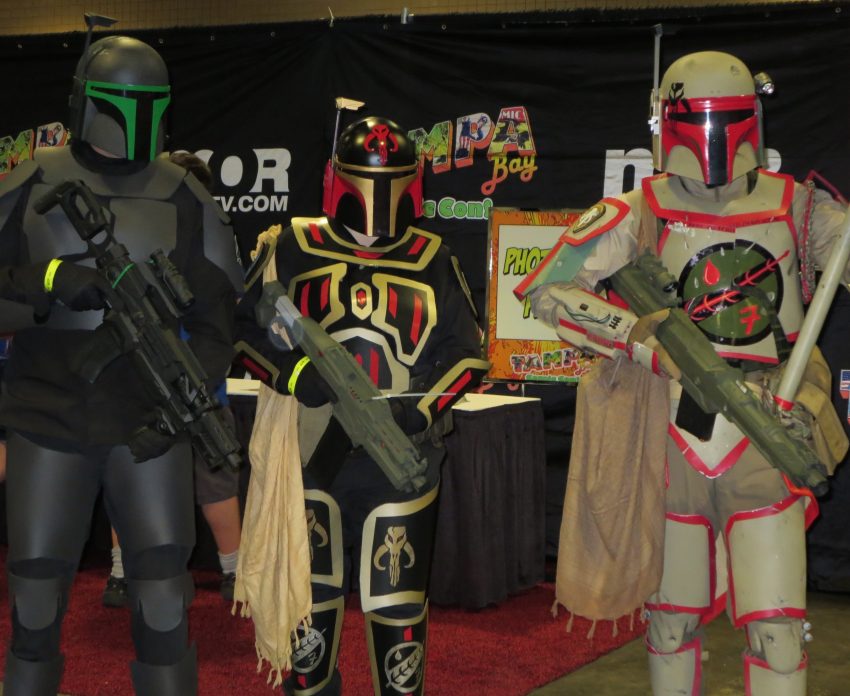 The pageantry of the weird and the wonderful were in full regalia this weekend at the Tampa Bay Comic  Con. The event coordinators are anticipating nearly 60,000 attendees to pass through the halls of the Tampa Bay Convention Center.  Collectors, vendors, artists, celebrities, and cosplay enthusiasts came out to geek out and have some fun.

The Comic Con has become a mecca for fans of things associated with alternative entertainment. From TV and film superheros, sword and sorcery genres, zombies all the way to My Little Pony. Like Comic Con’s in the past, this year’s event is still a homage to what the name implies: comics. Allen Bellman is 92 years old and still drawing and designing comics. He cut his artistic teeth back in the 1940’s on Captain America. He was with Marvel Comics from the beginning and remembers is first encounter  with Stan Lee, the godfather of the Marvel superheros.

“Stan Lee came back from the army. I didn’t even know who he was. He was walking behind a gentleman; known as Robbie Soloman, who was, I understand, a brother-in-law to Martin Goodman, a publisher. And Stan Lee, I didn’t know who he was. They were breaking in him to be editor. After Robbie Soloman passed away at an early age, (then) Stan Lee never walked behind anyone else.”

With an independent publisher there is a freedom to develop and market a comic, which doesn’t always happen with the big corporate publishing houses. Ruben Romero is with Think Alike Productions. He is the writer of The Agency. He describes it as Harry Potter meets Mission Impossible without the wands. Romero said there are a lot of benefits to being independent.

“It’s not being weighed down by rules and regulations of a big 10 publisher. It also gives us the opportunity to find other like minded individuals who are out there creating comic books who are pushing the envelope. Who are telling stories that you might not necessarily find at Marvel or D.C. And working with them and bringing them on board.”

Richard Rivera is also with the publisher, Think Alike Productions. He describes his Stabbity Bunny comic as the intersection of Nightmare on Elm Street and Sesame Street. The approach he uses to finishing a new comic is a metaphor for the digital age. Rivera explains it like this:

“…everyone of my comics is being done completely digitally; which is really good. Because if it wasn’t done that way then the person who’s drawing it in North Carolina would have a hard time getting the files to the person that’s coloring it in the Philippines and the person that’s lettering it in Ohio. This way we got one DropBox to put it all in there.”

There are old school artists within the comic genre who still write the stories, ink the cells and color the rest of the storyboard in. Michael Adam Lengyel does just that in his series The Mannamong. It is intended for all audiences; family friendly. Told from the perspective of an 8 year old girl as she encounters beings in the spiritual/mystical world and tries to make sense of it all. His work is a balance between two comic worlds.

“I like to integrate both the style of Eastern and Western animation to incorporate into one. It’s not like it’s pure Manga or anything. It’s not pure American cartoon either. As for the mystic Mannamong characters themselves; they’re actually a combination of a whole bunch of animals into a whole unit. To make them a little bit more unique and interesting in that regard.”