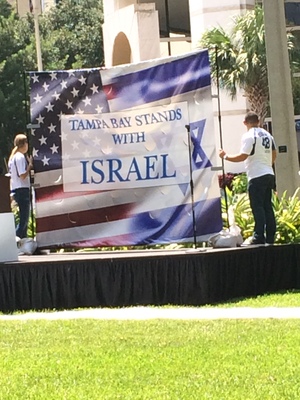 Supporters of Israel rallied this afternoon in downtown Tampa. Fifty or so people gathered holding signs and playing Israeli music.

Detlef Borges from Sebring says the U.S. is right to keep shipping ammunition to Israel.

Another attendee at the rally, Amy Nash, came from Lakeland to support Israel.

In news from Gaza, Israeli forces are moving deeper into southern Gaza, searching for a soldier who was apparently captured during a clash with Hamas militants earlier in the day. The forces are being backed by heavy tank fire and airstrikes. More than 60 Palestinians and two Israeli soldiers have been killed today in fighting that quickly shattered a cease-fire brokered by the United States. The truce collapsed less than two hours after it began.

The Israeli Cabinet has been meeting in a rare Sabbath session to consider options, including whether to expand the 25-day-old operation against Hamas.

Today the U.S. Senate rushed through a $225 million bill to replenish Israel’s missile defense system, and House approval was expected in the final hours before lawmakers began a summer break. The money will go to restocking Israel’s Iron Dome, which has been credited with shooting down incoming rockets fired by Palestinian militants, though some say it’s not as effective as advertized.

The Times of Israel briefly had a blog on its site today titled “When Genocide is Permissible,” speaking of the attacks on Gaza. It was quickly removed, but not after screenshots and criticism from commentators that genocide is never permissible.