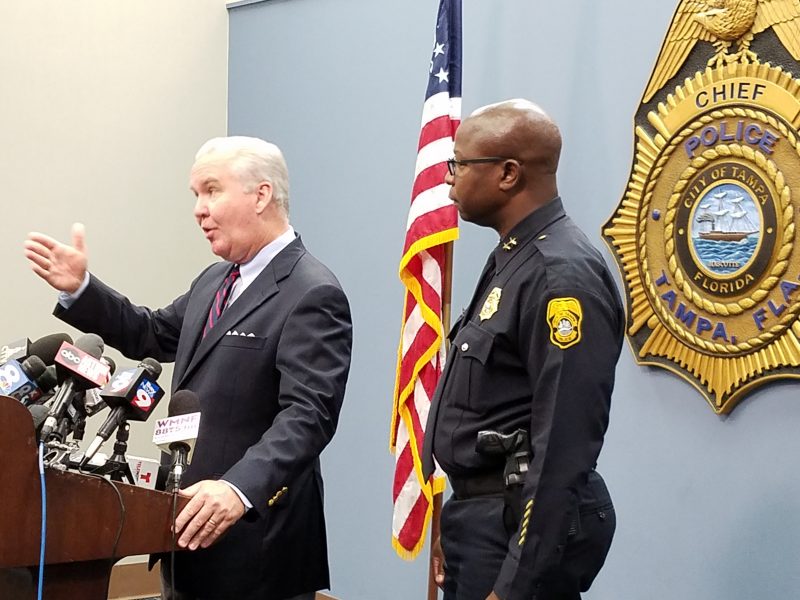 Tropical depression 9 is expected to turn toward Florida’s Gulf Coast and strengthen to a tropical storm; Tampa’s Fire Chief says residents can expect 4-8 inches of rain and 20-40 mile an hour winds from this storm.

In a press conference Tuesday morning Tampa Mayor Bob Buckhorn said barricades are pre-positioned at twenty known flooding locations. His best advice to residents is have a plan and don’t drive through standing water.

“We anticipate this is to be largely a rain and wind event. Obviously, based on our experience here in this community, our topography does not lend itself to heavy rains. We have a lot of standing water in areas that tend to collect water and that will be the same with this event, depending on the amount of rain that comes. It could be upwards of 5 inches or higher. If that is the case, we will have flooding and standing water in the usual places, where we normally have it.

“Our words to this community are very simple: Number one, be prepared. Have a plan, even if this is not a full blown tropical storm or hurricane.

Tampa officials say schools will make a determination Wednesday evening about whether there will be closures on Thursday. In an email Pinellas County Schools gave a similar timetable.

Buckhorn says flooding could be less of a problem because the city has built a diversion pipeline in South Tampa and a downtown wastewater pump has been upgraded. On Thursday Tampa City Council will vote on a new stormwater fee. Buckhorn says it will make possible $250 million in infrastructure improvements.

In Manatee County Tuesday and Wednesday only sandbags will be available from 10:00 a.m. – 6:00 p.m. at Buffalo Creek Park in Palmetto, G.T. Bray Park in Bradneton, Lakewood Ranch Park, Stormwater Ops in East Bradenton and the Rubonia Community Center in Palmetto.