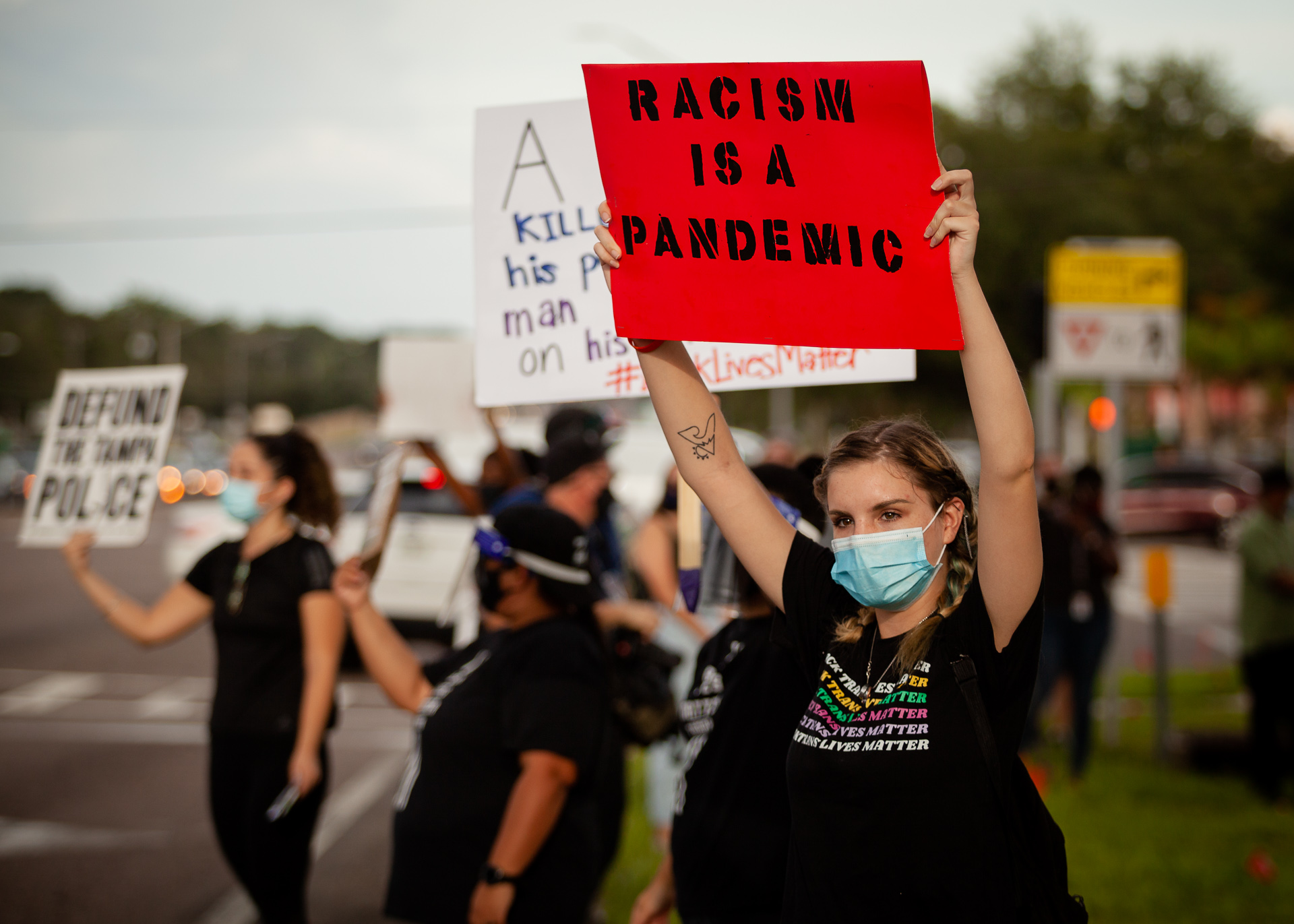 Dolores Bartels said before this year she’d never been scared to be alive. But as police killings of Black people and protests against police brutality remain prevalent in 2020, she said the fear has grown.

“As a black woman I have never felt as scared as I do this year,” Bartels said. “There’s so much stuff going on. There’s so many things I have to worry about. My friends getting shot. Me possibly getting racially profiled.”

On Friday, 27-year-old Bartels joined nearly 50 others along Fowler Avenue in Tampa near the intersection of 56th street, just a half-mile east of the University of South Florida.

Protesters called for the prosecution of police officers who have killed Black people in recent months, especially Rusten Sheskey who was identified as the officer who shot Blake.

The chorus of activists shouted “Indict. Convict. Send those killer cops to jail. The whole damn system is guilty as hell.”

Speaking through a bullhorn from atop a small hill, activist David Jones called to the crowd:

“When Black lives are under attack what do we do?”

“Stand up fight back,” they responded.

Blake’s shooting is the latest in an alarming and growing list of Black people shot by police this year.

Members of the Tampa chapter of Students for a Democratic Society said they’ve been taking to the streets since February when they demanded justice for Ahmaud Arbery, a black man killed by a white father and son while jogging through a Georgia neighborhood. Arbery’s killing was followed by the police killings of Breona Taylor and Floyd, both unarmed.

Members also said they want justice for Josiah Pinner a 15-year-old-boy killed by a speeding Hillsborough County Deputy and Jonas Joseph, a 26-year-old Black man who died after being shot at 125 times by Tampa police in May. In either case, no officer was charged with a crime.

“We want to stand in solidarity. We want to create a movement,” Taylor Cook, a 20-year-old USF student who helped organize the protest, said. “You know, George Floyd, his murderers were arrested. That was because of the people taking the streets. We hope that Jacob Blake’s brutalizers get indicted and convicted. And we also hope for Jonah Joseph and Josiah Pinner that the cops who murdered them get indicted and convicted.

One protester, an American Sign Language interpreter, gave others hand sanitizer and signed along to chants.

Across the country and even home in Tampa, protests have been met with violence from police and counter-protesters, who in multiple instances have tried to hit protestors with vehicles.

Friday’s protest remained peaceful. Cars passed through the intersection, many honking and cheering the protestors on, some rolling their windows down and extending a raised fist. The few we countered simply drove by shouting obscenities and “Trump.”

As protestors chanted and gave speeches calling for money to be diverted from police budgets and redistributed through the community, even State Attorney Andrew Warren was called out.

Jones, a 20-year-old activist, said Warren, a democrat who ran for the office as a progressive reformer, hasn’t done enough to speak against violence committed against protesters by police and needs to display more transparency in Joseph and Spinner’s killings.

“Calling yourself a progressive and actually putting forth the effort and using your office to promote progressive change are two different things,” Jones said.

Until they see change, Jones said he and others will continu e to make their voices heard.