The Statewide Coronavirus Vaccination Community Education and Engagement Taskforce unveiled its 10-point plan Wednesday. It aims to get more COVID-19 vaccine to Florida’s minority communities. The Task Force announced the plan during a morning Zoom meeting.

Task Force Chair Reverend RB Holmes said in the week since the group announced its formation and organizational structure, it put together a cohesive and comprehensive plan of action.

He called it the SMART plan.

AS of Monday, Florida ranked 20th among states in first-dose vaccine distribution with about 630,000 – or 3.3 percent – of Floridians vaccinated. But the State, which was among the first to distribute the vaccine to the 65-and-older population, has come under fire for a confusing and congested rollout plan some say favor the wealthy. Sen. Rick Scott has called for an investigation, alleging nursing home donors and country club members were fast-tracked for vaccine doses.

Former Jacksonville Mayor Alvin Brown is a member of the Task Force. He said it’s up to the faith-based community; historically Black colleges and universities and other partner institutions to step in and help the government. 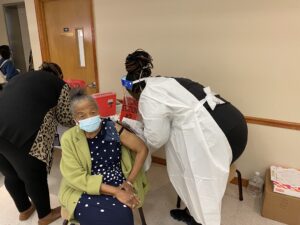 The Task Force will work with the Biden administration to use the Task Force as a model throughout the country. It will also make sure vaccines are allocated to underserved communities.

“We want to be able to go directly with our president and vice president and his Task Force to share our vision with them,” Holmes said. “And working with hospitals across the state of Florida to make sure the vaccines will be designated to those various venues.”

The action plan’s steps intend to foster communication and cooperation between government institutions; health systems and minority communities; as well as inform communities about the vaccine through marketing and educational campaigns. It will also look to make sure prisoners are included in vaccine distribution. And will urge Gov. Ron DeSantis to expand Medicaid.

A purpose that is righteous

Mayor Brown said the mission might be daunting. But he turned to the words of Bernice King, daughter of Dr. Martin Luther King, Jr.

“There is tremendous power when people come together around an issue that is clear, a cause that is just and a purpose that is righteous,” he said, quoting King.

“COVID-19 just simply pulled back the scale of significant health disparities and food deserts within our communities,” he said. “When this is over – and it will be over – we cannot go back to business as usual.”