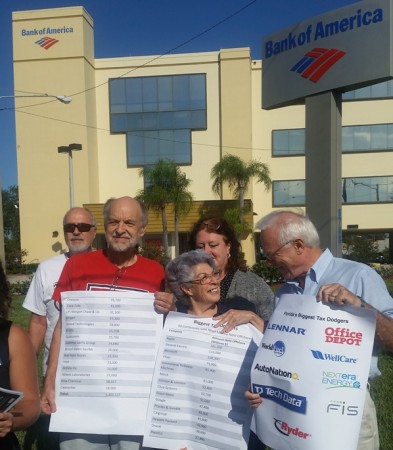 In 2014 nearly three-quarters of Fortune 500 companies used offshore havens to hide profits and pay less U.S. taxes; that’s part of the findings of a report released Tuesday by public interest groups. During a press conference in St. Petersburg Michelle Allen with Florida PIRG said thirty of those companies accounted for 62 percent of profits sent offshore; a practice she calls “egregious abuse.”

“Here in Florida a few of the biggest offenders are Office Depot, World Fuel Services and Ryder Systems. And collectively these three corporations last year reported sending over $2 billion of profits offshore.”

Allen and others stood in front of a Bank of America building, one of the companies singled out in the report. Other Florida Fortune 500 companies that rely on offshore tax havens are Jabil Circuit, Tech Data, WellCare Health Plans, Fidelity National Information Services, Jarden, and Lennar.

What does Nurse think should be done?

“There’s really two issues. One is: if you could close the tax loopholes, like this loophole, then you frankly could lower the property tax rate. We have a number of our largest corporations that don’t pay income taxes on massive profits because of this shell game. And so you have to close that tax loophole so you get a level playing field.”

The report, called Offshore Shell Games, is by the U.S. PIRG Education Fund and Citizens for Tax Justice.

Jack Donovan is the minister of the Unitarian Universalist Church of St. Petersburg. He called offshore tax havens immoral.

“The result is that many of the basic needs of our country like public safety, schools, health care, roads, other infrastructure, economic development and environmental protection go unmet or are paid for by those least able to afford them or must be paid for by adding to our national debt. As a citizen and as a clergy person I believe wholeheartedly that this shirking of fair responsibility is perverse and severely damaging to Americans, to humankind and to Earth-kind. And I would say, thereby, that it is immoral and can and should be ended by federal law.”