“If you’re an artist, the art world is not a good place for you. If you’re an accountant, the art world is a good place for you.” Says Peter Harris who also happens to be an artist, film-maker, and musician. His work often involves experimenting with new ways of making self-portraits, many of which become collaborations.  In 1998 he began working ‘by proxy’, inviting family and cultural icons who have had an influence on his life to give him ideas for paintings, searching for his identity through those who had played a part in constructing it. His longest-running and most well-known association is with Jamaican music legend Lee ‘Scratch’ Perry. Since 2003 they have been working on a series of drawings, paintings, and films as well as music projects. In 2003 Harris collaborated with the London Mennonite Society to make the short film Hymn which was screened at the National Film Theatre. His feature-length cult documentary Higher Powers (2004) features interviews with a host of eclectic personalities including the future Prime Minister Boris Johnson, Ken Russell, Uri Geller, a gangster, police chief, religious leader as well as artists interspersed with performance art pieces and animations. In 2018 he began working with Trashmouth Records and released his first solo album Adverts which included guest performances by Lee Perry and Vic Godard. Each album contained an ‘art advert’ in the form of a one-off painted collage. He is also working with Zsa Zsa Sapien from the South London band Meatraffle on a collaborative music project under the name ‘The Hi-Fi Twins’. 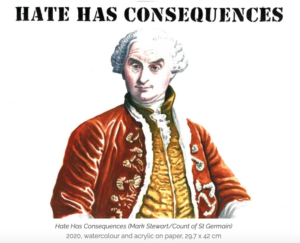 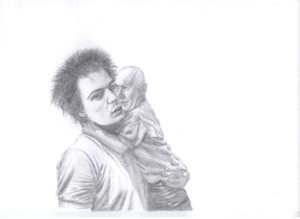 BombArt, is Peter’s current project with Mark Stewart, artist, vocalist, producer, and songwriter from Bristol, widely known as a founding member of The Pop Group, Mark Stewart & The Maffia, and as a soloist.

Peter Harris spoke with Norman B about BombArt, his art, and music, dealing with Covd19 and his views on the art world.

The music included in the program:

1.Peter Harris – You Will Be My Dad, mixed by Adrian Sherwood, from the album, Adverts on Trashmouth Records

2. Unreleased track, Babyman – Babyman, an art and music collaboration with Them Driver