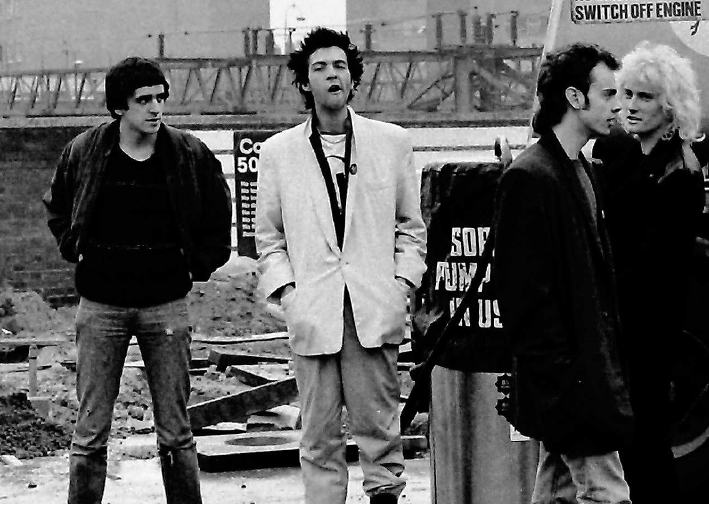 “These photos of Killing Joke have been nesting in the dark for a long time.” Writes Frank Jenkinson in the introduction to his self-published book, KILLING JOKE Picture Book 1979. Frank was living in the same ramshackle house as the band and their original management team, in the then bedraggled area of Notting Hill Gate, London. “This book of photos were taken in 1979, when things were kicking off for the band,” continues Jenkinson, “These were early days and I happened to have a camera. There are a lot of photographs, and I had some difficulty editing. Each one seems to have an interest in itself. The quality varies, remember, these were analogue times: I pushed the film to the limit in order to avoid the use of flash in low light. I can still see some sense of excitement of those times in them.”

Frank’s extraordinary photographs lay dormant in a dusty box, under his stairs, until he recently noticed on Facebook, Killing Joke‘s

ever-increasing and devoted following. Frank witnessed the birth of what was to become one of the most influential bands of the late 70’s London music scene. He went along to all of the band’s early gigs including the legendary John Peel Radio Show Sessions

. The photos he took, graphically document a moment in time, now long gone and shrouded in mystery. His unique photo-book, represents a small selection from his treasure trove, and, if the response to this book is encouraging, he plans to publish a much larger volume of his historical pictures, covering the period from ’79 to 1980.

Frank Jenkinson will join the next edition of Life Elsewhere to talk about his historical photographs, the early days of Killing Joke and what life was like in London, circa 1979. To round out our focus on Killing Joke

, we look to the future of music, as envisioned by Martin Youth Glover, with highlights from Norman B’s 2013 in-depth interview with

The Killing Joke photographs are from the BBC John Peel Sessions, October, 17, 1979, by permission of Frank Jenkinson