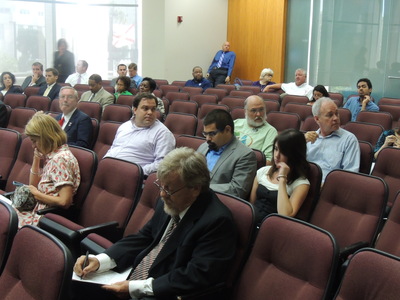 Groups who want more transit options in Hillsborough County like improved bus routes and rail say there’s too much emphasis on roads. They’re pushing back against a plan that will be presented next week.

“We’re concerned that the policy leadership group spent 6 separate meetings talking about road projects, 5 separate occasions about governance, but now plans to talk about transit just one time before approving a plan for review and we’re afraid such a plan will be D.O.A.”

That’s Phil Compton with the Sierra Club. Transit activists expect the Transportation for Economic Development Policy Leadership Group to ask for additional funding. That could mean a referendum similar to one that failed several years ago asking for a penny sales tax boost.

“We’re now concerned that the plans unfolding here are repeating the mistakes of 2010 while adding new problems that may doom such a plan to failure and we don’t want to see that happen.”

That funding effort’s demise was attributed to poor planning by the county. Voters didn’t know exactly how their money was going to be spent. So far talks coming out of the policy leadership group have centered around road projects totaling billions of dollars. Transit proposals represent just a fraction of that.

“Last week, the Greater Tampa Chamber brought together chambers from around the county – everyone talked about how their part of the county needed better transit, not wider roads.”

Members of the Sierra Club haven’t been able to speak at the transportation policy meetings. Michael Newett is on the group’s executive committee.

“And since today is the only day we’ll get to discuss it from a public point of view, we thought it was really important to make a suggestion that get a delay there so a little bit more input can be done.”

Across the bay, a transit plan called Greenlight Pinellas has been gathering input since 2010. Voters on that side of the bay will decide in November whether to pay an extra penny sales tax. That would fund a series of very specific plans including more bus service, bus rapid transit and passenger rail eventually connecting to Tampa. But activists are worried Hillsborough County is dragging its feet coming up with regional connections to make the system work. Mike Merrill, the county administrator, responded to those fears.

“Well, the transportation plan hasn’t even been delivered yet so I’m not sure exactly what you’re referring to. That will be brought to the policy leadership group on June 26th. So, that will be the first time that the entire transportation plan is presented. So, anything that you’ve seen so far is preliminary. There will be a balance of transit. There will be three months following that of public outreach in various different venues before anything is ever decided on. So, there will be plenty of time for public engagement.”

Meanwhile, Hillsborough County Commissioners issued a proclamation for National Dump the Pump Day to be celebrated in Hillsborough County. HART, the county’s public transportation agency, is offering free bus rides all day tomorrow in recognition of it. Commissioner Sandra Murman touted the savings drivers can enjoy by riding a bus.

“According to the APTA’s most recent transit saving report, a two person household can save, on the average, more than $10,174 a year by downsizing to one car.”

But people who ride buses in the county regularly argue the system isn’t good enough. Brian Kundinger is with the Our Wal-Mart Campaign advocating for low-wage workers.

“As it is right now, the transportation, it takes workers a very long time to get to and from work which means even less time with their families. And especially when these workers have overnight shifts and they’re coming back in the very early morning or they’re trying to get to work very late at night it becomes increasingly difficult. If for some reason one of these buses were to stop working at one of their time shifts someone’s all of a sudden thirty minutes or an hour late and they get written up or they get fired for such a small infraction.”

The groups are asking commissioners and the transportation policy group to make sure that whatever plans they bring to the public include adequate funding for transit options. The Sierra Club’s Compton said that would be 75% of all new revenue.

“Which would only be 15% of all transportation spending in all Hillsborough County.”