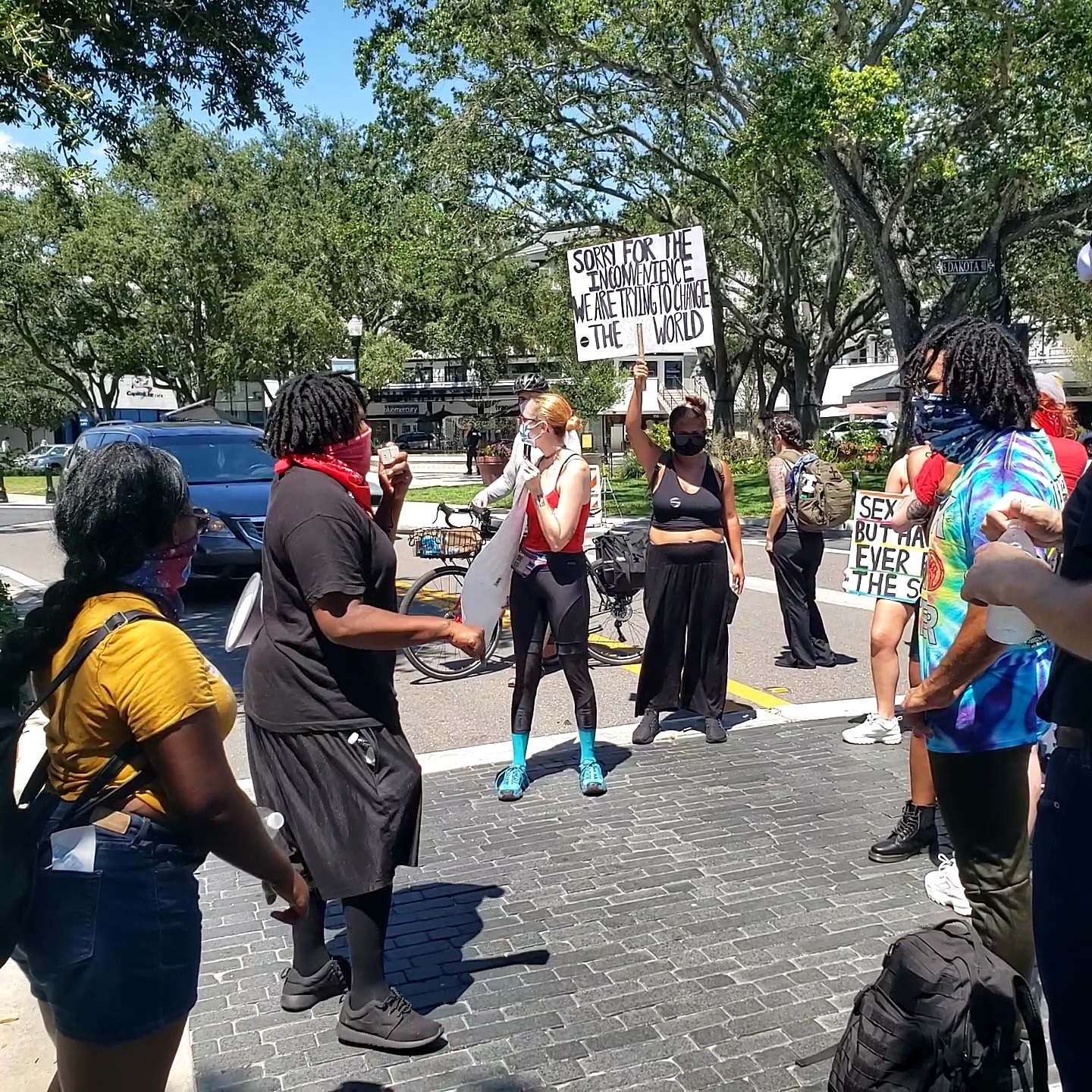 Civil rights attorney Benjamin Crump has released a previously unreleased video of a red truck striking and injuring a Black Lives Matter activist during protests during the Juneteenth weekend in Tampa. Tampa Police have so far not arrested the driver of the truck that struck demonstrator Jae Passmore.

In the short video below you can see a red pickup truck pulling onto the wrong side of the street. You can hear its tires peel out as it speeds toward protesters and you can hear the impact as the front of the truck hits protester Jae Passmore.

After she was struck by the pickup truck, Passmore screamed as she ricocheted off the front corner of the truck, into another protester and onto the ground. The truck then sped away.

Before she was struck, you can hear Passmore saying, “I’m ready to die for what I believe in. ‘Cause he goes and runs me over, that’s gonna be what it is.”

WMNF’s original story is below. Some of the videos have been removed by YouTube or their original posters:

Over the weekend several Juneteenth marches and celebrations continued across the Tampa Bay area. On Sunday one march landed in front of Meat Market in Hyde Park Village, which was hosting brunch despite an employee recently testing positive for COVID-19. Former Hillsborough County Commission candidate and military veteran Jae Passmore was struck by a car during the demonstration in Hyde Park Village after 20 Black Lives Matter protesters had blocked traffic during their march.

Shoppers passing by watched as activist Jae Passmore sang and led the chants with her megaphone.

“A mild inconvenience is far better than a life lost.”

They came out in support of a petition that she created called #dumpdugan, which makes one demand:

“That Mayor Jane Castor fires police Chief Brian Dugan for his blatant lies on use of force on peaceful protesters.”

So far Jae has gathered more than 700 signatures online.

“On that petition, there are a collage of pictures that protesters offered up to us to display their injuries. Their head wounds, their back wounds, their leg wounds, all showing that they were shot from behind. 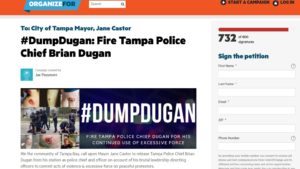 Some Hyde Park workers like Emerson stepped outside in support of the march.

“Nothing can happen until Black Lives are most importantly focused on. Unarmed people are being killed every single day”

Resident Chad McLaughlin was watching the demonstration from outside his home when the protesters brought traffic to a halt.

“And then they’re right here in the intersection of Swann and Rome, and they’re blocking the whole thing. The car starts honking and then this red truck just peels off and comes right through them.”

One activist named Z said that the inconvenience was meant to send a message.

Jae was rushed to a hospital to be treated for her injuries. Witnesses filed a police report to try to identify the driver who had fled the scene. Protesters continued to block traffic as they marched down Swann ave. At least two other drivers threatened to run over anyone who would not clear the road.

More videos from the rally: