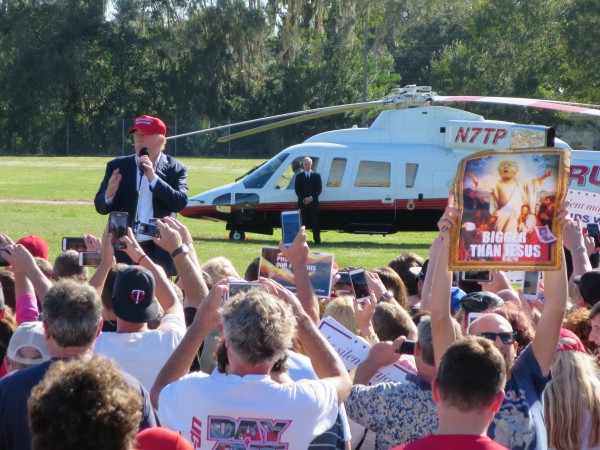 Tough talking tough Guy, Donald Trump, helicoptered into Sarasota for a sold out rally. Last Saturday fans and backers either crammed into a Sarasota area or waited outside to listen to the Donald stump. The Republican front-runner in free-form monologue style bounced back and forth from laying out his ideas to lambasting his rivals and naysayers.

The Donald Trump presidential campaign descended on Southwest Florida to the delight of somewhere between 6 to 8 thousand people at the rally. Before addressing the inside crowd he engaged those unable to get in. Once inside Trump started his brash and brazen takedown of people like Marco Rubio, Jeb Bush, Hillary Clinton and US military generals. For nearly 20 minutes Trump delivered a rambling diatribe on how the media misrepresents him.

Not everyone thinks Trump is treated unfairly in the media. Along the sidewalk outside the arena nearly 100 protesters rallied against Donald Trump. Larry Grossman, one of the protesters, said there are many things wrong with Trump but mainly his polarizing rhetoric.

Trump took the time to clear up the kerfuffle surrounding his apparent mocking of a disabled newspaper reporter. He said he supports the disabled and African-Americans and Hispanics. Trump emphasized his support of military veterans. Robert Illes, a disabled military veteran, said Trump has the ethic to lead this country.

Scattered among Trumps barbs and rips on his detractors, were his vague pledges to make America great again. Things like economic bullying tactics aimed at China, Brazil, Japan and some OPEC countries. He took the opportunity to sprinkle more detail on his Mexican border wall proposition. Trump said Mexico can easily pay for the construction of the wall.

For about 10 minutes before leaving in his helicopter, Trump addressed the roughly 1000 people waiting outside who were unable to get into the arena. This is the first time the Trump campaign has held a rally in Southwestern Florida. 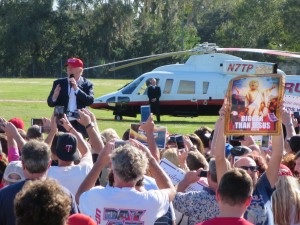