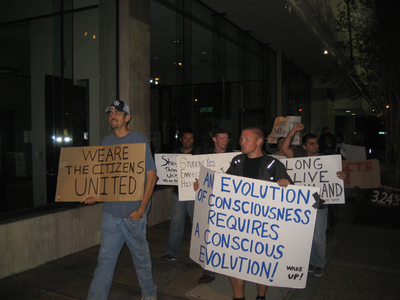 Monday morning update: there were three arrests early this morning and we’ll bring you a full report at 4pm. In the meantime here’s one eyewitness report from OpenLetterNews.org.

Thursday afternoon update from Occupy Tampa: “Alex Schlegel and Daiquiri Jones, the two occupiers who were detained this morning …
The two were released but their charges WERE NOT dropped.”

There were two more detentions this morning at Occupy Tampa. In about the ten o’clock hour Alex Schlegel and Daiquiri Rene Jones were in Curtis Hixon Park, which was open to the public, and were detained after being told by Tampa Police to leave. This is Austin Fatone.

Several police officers gave instructions to city workers to confiscate any objects that weren’t removed by members of the Occupy Tampa encampment. City workers put some bags and objects that weren’t immediately claimed into a trailer. But most things were removed by protesters. Stephanie Cannon hauled much of the gear to nearby vehicles and was frustrated at the request from police.

At this point one of the city workers who was told to haul away the groups’ belongings told Cannon they would be back if the police asked them to. But Cannon became exasperated with how Occupy Tampa protesters were being treated, including being told to get rid of their cooler that contained water. Police on the scene wouldn’t answer my questions. But Captain Brian Dugan did give some information to homeless-rights advocate Reverend Bruce Wright.

At the time of the detentions many of the Occupy Tampa protesters weren’t on the stretch of sidewalk along Curtis Hixon Park. Instead, they were at City Hall. During the Tampa City Council meeting they wanted to ask the city for a permanent encampment, of a kind recommended by an editorial in today’s St. Petersburg Times.

Last night occupations across the country held vigils and marches in solidarity with Occupy Oakland and their injured protester Scott Olsen. Here in Tampa, activists marched through downtown several times, including at 11 p.m., chanting “Occupy Oakland, Occupy Tampa” and “Banks got bailed out, we got sold out.” Protester Samantha Bowden said they were upset at how police assaulted the Oakland encampment.

Sixteen people walked past the police station, the Bank of America building and briefly onto the campus of the University of Tampa. Occupy Oakland voted last night for a general strike next Wednesday, November 2.

This is video of the Police giving orders for Occupy Tampa belongings to be removed:

Here’s the table they were allowed to keep: