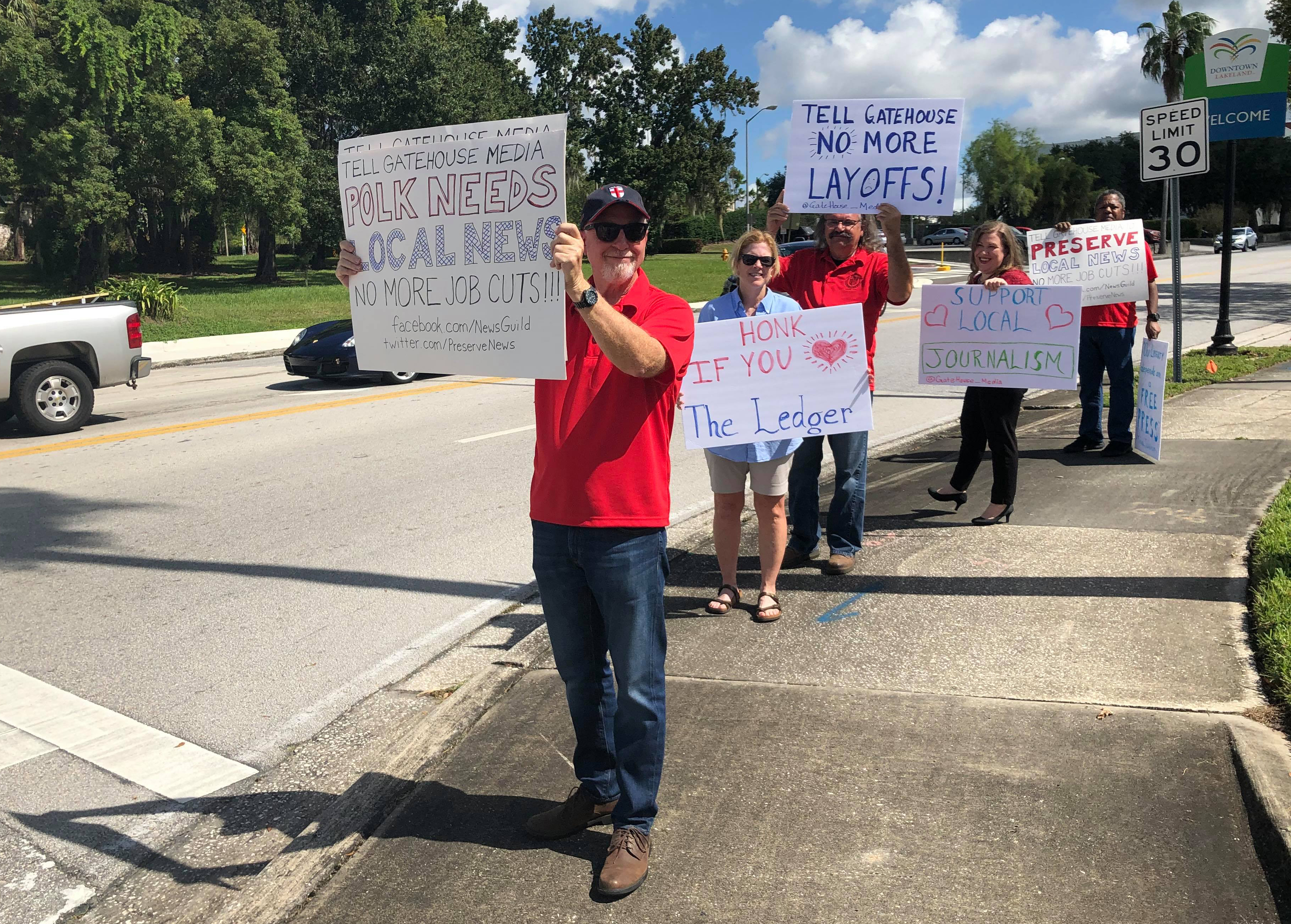 Newspapers are in crisis: budgets are being cut, reporters are getting laid off, and large media conglomerates are merging and even shuttering some newspapers completely. So unionized reporters are fighting back to try to save their jobs and strengthen journalism.

During their lunch hour Thursday, reporters from The Ledger in Lakeland demonstrated as part of a nationwide “day of action.”

WMNF News interviewed Kimberly Moore, a Ledger reporter. She’s a shop steward with their union, The News Guild, which is a sector of the Communications Workers of America.

“We are at the corner of Lime Street and Sykes Boulevard in Lakeland. And there’s about half a dozen reporters and a photographer from The Ledger standing here on the corner holding up signs. Some of them say, ‘Honk if you love The Ledger.’ Some say, ‘tell @Gatehouse_media no more layoffs.’

“Last May we laid off a couple of editors and a photographer. We’re down to, I think, about 15 people in our newsroom now. And that’s down from a high of about 100 maybe 15 years ago.”

SK: So, what effect does that have when you had 100, roughly, reporters and now you’re down to 15? How does that affect how you cover local news?

“Well, things just don’t get covered anymore. We’re a vital part of this community and have been for more than a hundred years. It’s a frightening time in journalism when things are going uncovered. City Commission meetings in Polk County, we just kind of take a cursory glance at their agenda and try and figure out if there’s something going. But you and I both know, as reporters, that you really have to go to those meetings. You really have to hear the discussion, hear what concerns people, hear what concerns commissioners, in order to cover it properly.”

SK: The Ledger is owned by GateHouse. And GateHouse and Gannett are talking about a merger. What do you know about that merger possibility? And what do you fear would happen if that goes through?

“Well, the union does not officially oppose the merger. I personally oppose it. But, in order to group hundreds and hundreds of newspapers together, all over the country, we know — it’s not even a fear, we know — that they’re going to lay more people off. We know that there are going to consolidate newspapers, which means newspapers are going to close. It’s terrifying, in terms of a job loss. But it also terrifying in terms of democracy. We need journalists to uncover things that are being done incorrectly in America. We need journalists to cover the important stories.”

SK: What would you recommend people to do? Most of our listeners don’t own newspapers and can’t hire more reporters. But what can people do to help a situation like this out?

“They can subscribe to their local papers, please. Please subscribe. Our online subscription at the Ledger is very affordable. It’s only about a dollar a week. It’s about $50 a year. So please subscribe.”

SK: What can you tell me about other similar demonstrations around the state today?

“Well, I know that newspapers with a union, who are owned by GateHouse, are all holding similar demonstrations all over the state. The Sarasota Herald-Tribune and the Times Union in Jacksonville should all have people out front. Please go by and honk and be supportive and wave. And tell people, you know, that you love their paper.”