Two years ago, eight young people sued Florida over the state’s policies of burning fossil fuels despite their harm to the global climate. On June 1st, the case will get a hearing in Leon County Court – the state has filed a motion to dismiss the case.

Andrea Rogers is a senior litigation attorney with Our Children’s Trust; one of seven attorneys in the case Reynolds vs. State of Florida. 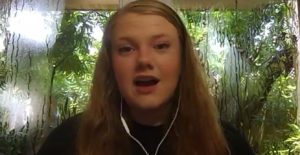 Delaney Reynolds is a plaintiff in the youth climate lawsuit, Reynolds vs. State of Florida. 27 May 2020.

“The plaintiffs are not challenging the state government’s failure to address climate change. Rather they’re challenging the actions that the state is taking by planning — through issuing permits — that essentially promote and perpetuate the use of fossil fuels. Even though they know doing so results in greenhouse gas emissions which contributes to climate change and in turn harms youth.

“The government conduct that we’re challenging is essentially Florida’s energy system. And the results of Florida’s energy system are quite remarkable. Florida emitted 235.1 million [metric tons] of carbon dioxide in 2016. And what that means, that’s equivalent to burning all of the coal in a 13,000-mile coal train, which is a lot.

“If Florida was a country it would be the 27th largest emitter in the world.

“Florida is ranked third in the nation in both total energy consumption and electric energy consumption. Florida generates more electricity from petroleum than any other state in the nation. Florida generates the second-highest amount of CO2 emissions from electricity in the nation and renewable energy only accounts for about 3 percent of Florida’s overall generation capacity which is well below the national average of 15 percent, even though there’s a tremendous amount of renewable potential in Florida.”

Rogers was part of a video conference Wednesday about the climate change case.

She says Florida has infringed on the constitutional rights of the youth and is asking the court to recognize a fundamental right to a stable climate.

One of the youth plaintiffs is 16-year-old Lushia Phillips.

“I am a climate refugee. I’m currently in Chicago, Illinois. I grew up in Key Biscayne, Florida.

“Part of the reason I am suing is the government, it happened right after Irma. I was introduced to this lawsuit. And Irma affected my family very badly.

“We had to leave as soon as we found out it was hitting because where I live the water is right across the street from where I live. So sea-level rise affects it and it causes a bunch of flooding.

“And while I was away I actually was staying in Chicago, Illinois with my cousins and it was a long road and it was a lot of traffic because everyone was trying to get out of the state of Florida at that time. When we came back we saw how much flooding happened while we were gone. We saw it on the news.

“It was crazy. The stores where we were, it showed the stairs, and we couldn’t believe it because had we stayed we didn’t know what we were going to do. My mom is a single parent. And we don’t have family in Florida.

“So it was either we depend on ourselves to fight out the storm or we needed to leave. And we decided to leave because we didn’t have the facilities to take care of ourselves in a place where we were just going to ….. So I feel like the government needs to hold accountability for people who aren’t climate refugees. Because it’s very hard to leave the place where you’ve grown up. I grew up in Key Biscayne. For years they had enormous flooding. There were always problems. And the electricity always went out when there were huge hurricanes.

“So it affected me and my family and I don’t want it to affect many more families.”