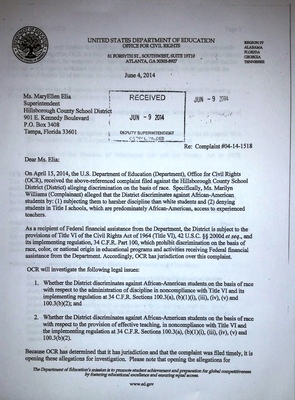 The Office for Civil Rights in the U.S. Department of Education is investigating whether the Hillsborough County School District discriminates against black students when it comes to effective teaching and discipline.

In a letter dated 4 June, the Office of Civil Rights asked Hillsborough Schools to turn over dozens of documents about things like disciplinary policies, the role of law enforcement officers in schools and teacher experience.

The investigation stems from a letter by Tampa resident and community activist Marilyn Williams – WMNF interviewed her Wednesday.

“I sent the letter and it went to the office of civil rights for the department of education. I found out that NAACP county group in south Florida had collaborated with the advancement project to file a complaint with the federal government office of civil rights. And so when I found out that this was going on, and then we’ve had several community meetings. I think maybe three or four community meetings. One meeting there was the representative from the ACLU who was giving data. One meeting where there was a representative from the southern poverty law center that was giving data, and also one meeting where the advancement project was giving data. And then a couple of those meetings there were young people from the dream defenders that were present and they spoke. And actually they invited, because we actually attended a meeting here in Tampa that was sponsored or held by dream defenders. This data was coming out and I was hoping that an organization would file a complaint. But one of the things that was consistently said at some of these meetings was, “Well, we can’t do this now.” I got tired of going to meetings. I got tired of hearing what we can’t do, you know, and so I filed a complaint.”

And the complaint is that the Black students are disciplined more often, and that their results, especially when it comes to FCATs are way depressed when compared to other students.

Give us some examples.

“For example, if you look at the FCAT scores over time, from the time that they were first given which was in 2001, to 2013, in 2001 the FCAT score for the third grade reading level for Black students was 37% reading at or above grade level. Now, I used to teach school a long time ago and if you got anything less than 60 to 65% that was failing. Well in 2013 FCAT scores for Black students reading at (grade level) there’s only 37% according to them at third grade level. In 2001 the FCAT score for the tenth graders, and that includes tenth eleventh and twelfth graders that have taken the FCAT in that particular cohort was 17%. And as you look at the scores over time, and if you look at it there’s no time in the history of the FCAT scores here in Hillsborough County that the majority of Black students have been reading at or above grade level. In fact the majority with the exception of one year, 2006, were reading below grade level. I sent that along with my argument, and one of the things that I said in my letter is that unless one is willing to accept the belief that Black students are intellectually inferior, and incapable of meeting the achievement levels required for minimum proficiency by the state, then one must question why the district has consistently had poor academic performance outcomes for Black students in reading and math as documented by FCAT scores from 2001 to 2013.”

The US Department of Education’s office for civil rights kind of thought you might have a point there and they wrote a letter to the Hillsborough County School Board requesting information.

“Well they didn’t ‘kind of’ think, cause they doubted me really because I actually went through several interviews with lawyers before they made a decision. And when they made a decision it was not one or two lawyers, it was a panel of lawyers going over the information and then the documentation that I was sending them and they made the final decision. And when, actually when I talked about the FCAT scores, and especially as it related to the graduation rate—I mean when you think about 29% of tenth graders which includes tenth eleventh and twelfth graders, only 29% of them actually passed the FCAT. You think about the graduation rate of that year, and that’s in 2013, and I believe it’s around 54% of Black students who supposedly graduated. Well, if you do the math and take the percentage out that didn’t pass the FCAT, then the graduation rate is far lower than what they tell us. And then I found out an interesting little fact, and that is that children who are placed in alternative education programs, their scores are not even counted in the data for what’s online. Their FCAT scores are not included, their attendance records are not included, their graduation rates are not included. And so, if you include that along with the low FCAT score you will find that number one, that 29% is lower and the graduation rate is even lower than what, you know, one would suspect.”

How is Hillsborough County Schools reacting to this note from the Department of Education’s Civil Rights Division?

“I’m glad you asked that question. From what I understand, because Elia is not exactly talking to me…”

“Yes, Superintendent MaryEllen Elia. But from what I understand they’re treating it as if this is not a big deal. That school districts all over the United States are going through this process, that it’s a routine process that’s being implemented by the Federal Government. And that’s not true. It’s not a routine process. It’s not something that’s happening to all school districts. It only happens when there’s a complaint filed and the federal lawyers find that there’s justification for the complaint.”

And finally, what would you like to see happen?

“The first thing is an acknowledgment that there is a problem in this district specifically as it relates to the education of black and brown children. And really, you know, I’m talking about black and brown children, but there’s white kids that are being miseducated as well, not to the degree that is happening with black kids and brown kids. But the first thing that has to happen is an acknowledgement. The second thing that needs to happen is that we really need to look at leadership. When the leadership suppresses information, then it’s hard to deal with the problem.

“If you can’t be open, if you can’t openly lay the issues out on the table, have an honest discussion, a discussion that requires that people all around the district that are involved in the work in the school district are not going to be afraid to step forward and speak about what they observe. I mean, the experts to this are within the district. I mean, there’s people outside the district that bring light to bear, but I just would really like to see acknowledgment that there is a problem here. And that they’re willing to work openly on the issue. And it’s not so hard to solve. There are some schools here that in the past, under really good leadership on a school level, have really been able to close the achievement gap. Ultimately, if there is honest acknowledgment and work done, the achievement gap can be closed.

Williams is a former member of the board of directors at WMNF.

As of air time, Hillsborough Schools Superintendent MaryEllen Elia has not responded to our request for an interview.