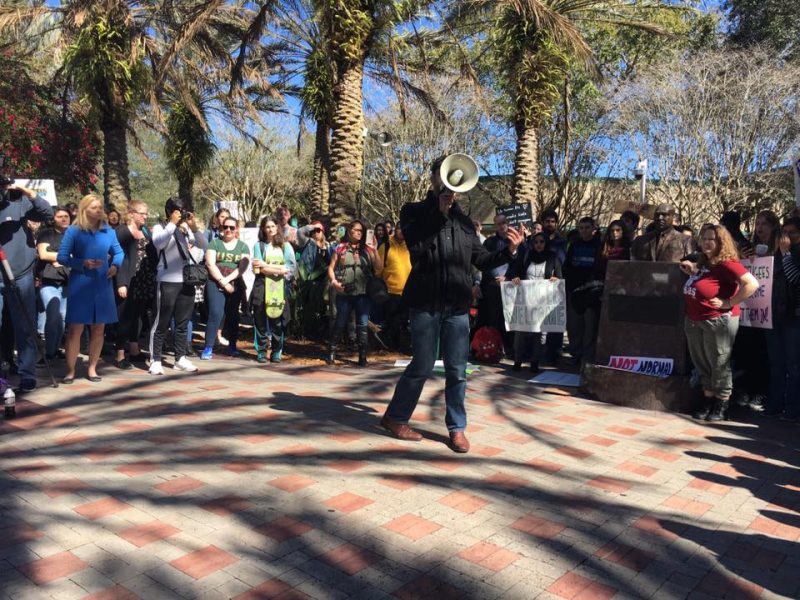 There have been protests at airports and other locations across the country since President Donald Trump signed a partial ban on immigration from some Muslim-majority countries on Friday. Hundreds of people marched along Seventh Avenue in Ybor City Sunday evening. They chanted “Immigrants are Welcome Here.” In addition on Saturday there were demonstrations in the Westshore district of Tampa and at the Tampa International Airport.

When this show aired on Monday a rally was beginning at the University of South Florida in Tampa in the MLK Plaza. Joining us on the phone  from the scene was Samantha May, with United Students Against Sweatshops at USF.

[Here is an interesting blog with poll numbers about a “Muslim ban.”]

We also heard about an ongoing meeting of the Manatee County Commission where, for the second day in a week the fertilizer company Mosaic is asking for changes to zoning in the east county for expanded phosphate mining.

Mosaic is asking Manatee County to re-zone a 3,500-acre parcel of land in the east part of the county to allow an expansion of phosphate mining; the land near the border of Hardee County is currently zoned for agriculture, but during an all-day meeting last Thursday Mosaic asked the county to change the zoning to mining and extraction.

On Thursday two residents spoke in favor of the expanded mining and more than a dozen people asked commissioners to reject Mosaic’s mining request.

We heard from one: Stetson University College of Law professor Paul Boudreaux, who addressed the issue of whether the County has the legal right to deny Mosaic’s request. After his statement, Manatee County Commission Chair Betsy Benac asked a follow-up question.