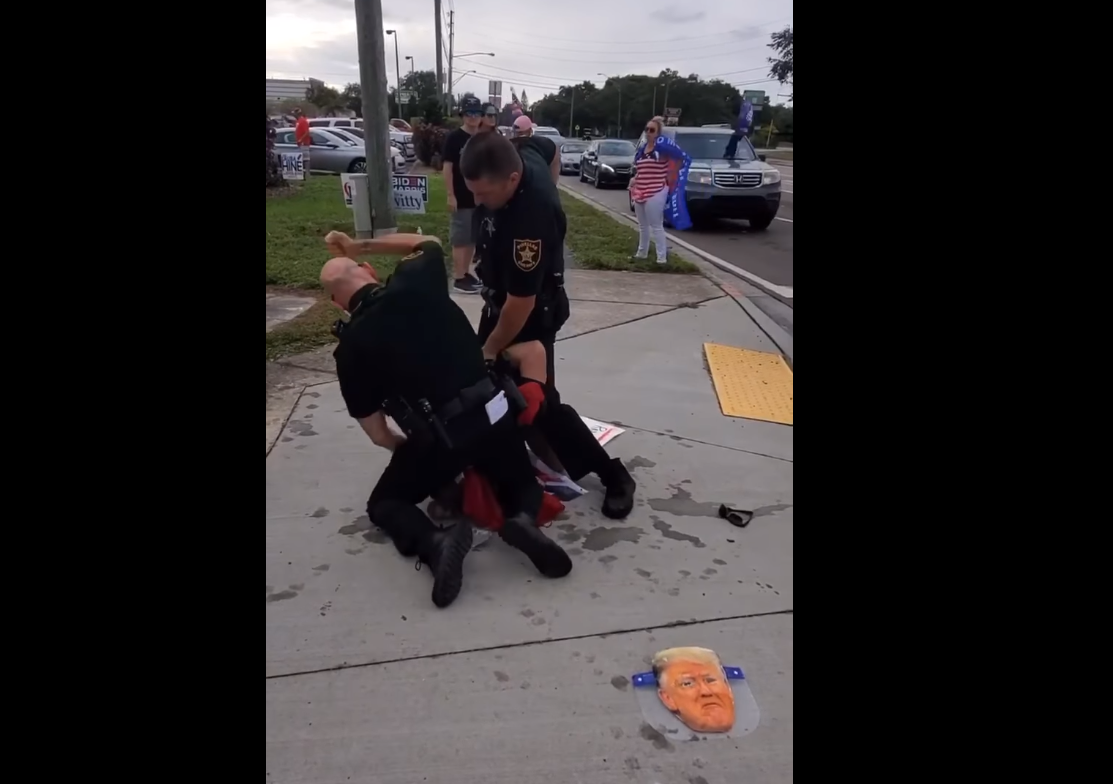 A video showing the arrest of a Clearwater man during a political rally in Palm Harbor has raised concerns over a deputy’s use of force.

The video shows deputies punching a Joe Biden supporter in the head and elbowing him in the back multiple times as he’s being held to the ground.

Whitney Wentz has joined friends on the corner of U.S. 19 and Nebraska Ave in Palm Harbor for two months now. She said the group waved signs to show support for presidential candidate Joe Biden and raise excitement for the election.

“We’re not here to create anything but other than sign-waving,” Wentz said. “It was the whole reason why I got involved. It was peaceful.”

But at their last event before Election Day, things turned violent as a group of Trump supporters arrived in their usual spot before they did. The violence though didn’t come from a clash between Trump supporters and Biden Supporters. Wentz said the violence came from the Pinellas County Sheriff’s Office. From the men she’d hoped were there to protect her.

“I was like, things get crazy. The police are gonna be there, and they’re gonna help. I didn’t expect that.”

Scott Rexroat draped himself in a Confederate flag and wore a face shield with a picture of President Donald Trump’s face on it. The 59-year-old musician held signs critical of Trump. One sign turned vice-presidential candidate Kamala Harris’s first name into an acronym. It read Keep America Make America Love again.

Rexroat was arrested after deputies said he was instigating fights and struck a deputy who was trying to pull him away. Deputies said he carried signs with swastikas But witnesses said that’s not how it happened.

A woman who asked not to be named for fear of retribution recorded the arrest.

“The police went from behind him and grabbed his arm. And he didn’t know who was after him. And he was saying I didn’t do anything and the cops proceeded to beat the, stomp the living out of him,” she said. “It was horrible. It was absolutely horrible.”

The video shows what happened after Rexroat was taken to the ground. He can be seen hunched over, on his knees as one deputy stands over his back holding him down with a knee and holding his left arm behind his back. Another deputy braces him from the front trying to pull his other arm to the back. The deputy then punches Rexroat in the head twice with a closed fist and drives his elbow five times into Rexroat’s back.

The Sheriff’s Office said it couldn’t comment on the arrest because it is part of an active investigation, but did say the deputies were not wearing body cameras. No other arrests were made at the rally.

The woman said law enforcement appeared to favor Trump su  pporters. When a Trump supporter began yelling at her, she went to a deputy for help.

“They told me I deserved it,” she said. “They’re not even trying to be advocates for everybody.”

Wentz and the woman who took the video said tensions have risen in recent weeks as more and more Trump supporters show up and are actually the ones who attempt to incite violence.

The woman said much of that came from Jonathan Riches, a staunch Trump supporter and known far-right provocateur. Riches frequently live streams his counter protests, often getting in demonstrators faces or yelling at them and urging them to act so he can report them to the police.

Brett Jennings, a Trump supporter, said Rexroat was out the day before in the same outfit holding signs with swastikas.

Jennings said Rexroat has been baiting and harassing Trump supporters for days and provided a video as evidence.

In his own video from the same day, Riches is seen speaking directly at people with a bullhorn.

Riches video also shows Rexroat minutes before his arrest. Neither of the signs he’s holding appear to have swastikas. Trump supporters surround him, curse at him and call him a traitor. He blows a pocket-sized air horn at one.

Shortly after, Riches ends his feed.

“I’m gonna go back to that guy that was in front of my face. I’m gonna take a couple friends down there. I don’t want to do it live you know, but.”

Rexroat was released from Pinellas County Jail Monday on $2,750 bond.