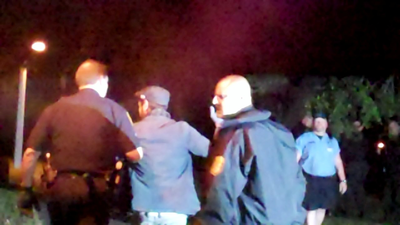 Tampa Police say overnight they arrested 29 members of Occupy Tampa in a riverside park west of downtown. Before the arrests about 40 people attempted to camp on a hill inside the park, but many people complied with police orders to leave.

The hilltop encampment in Julian Lane Riverfront Park was in plain view for police helicopters. More than a dozen Tampa Police vehicles arrived on the scene before midnight. Tampa Police Captain Brian Dugan and at least 20 other officers threatened to arrest anyone who would not leave the park. He told protesters they had to collect their belongings and leave, but he was interrupted by the people’s mic.

“Police Officer: Does everybody understand that the park is closed? You need to leave!
Protesters: Mic check, Mic Check! The park doesn’t close and we want liberation of the park! We’re trying to express our first amendment right so your not allowed to close this public space!”

Occupy Tampa’s goal was to occupy a public park for the whole month of December. More than 100 demonstrators marched from their permanent encampment outside Curtis Hixon Waterfront Park to Riverfront Park.

Before the group was arrested it chanted, “We are unstoppable, another world is possible,” and also recited the First Amendment of the US Constitution.

“Congress shall pass no laws prohibiting the rights of the people to assemble peacefully and to petition the government for redress of grievances.”

Jordan Harrah had not been protesting that night, but entered the park to see what was happening. He said he was unjustly given an official trespass warning.

“I walked over to the park to find out what was going on. As soon as I walked in the park and I saw the cops, the cops informed me to leave. As soon as I left I was ordered by the original cop to stay. As soon as I stayed they took my ID and trespassed me from every city park.”

About four people had set up tents, and two dozen other protesters laid out sleeping bags. But when police arrived to evict their new encampment, many of the group left. Daiquiri Jones has a pending felony charge, and wasn’t originally planning to get arrested.

“Tonight would be a really bad night for me to get arrested. I’ve been arrested four times and I believe the police are trying to single me out amongst other people.

Reporter: “So you’re clearly trying to prevent that from happening again.”

Yes, because there’s a chance that they’ll try to keep me in jail as long as they can.”

Several people called the police racist for targeting Jones, who is African American. Occupy Tampa’s Chris Kuleci was one witness.

“A bunch of individuals were in the park and attracted the attention of the police officers that were standing over there. Everyone came back over to the side walk and they singled out Daiquiri Jones for arrest because he is a recognizable face of Occupy Tampa. He’s one of the guys that have been on the ground for as many days as he hasn’t been in jail. They have been targeting people who are here all the time. While there were 15 or 20 people running into that park, that’s the only one that they decided to come back outside and arrest.”

The crowd burst into chanting the word shame at officers. Lieutenant Bucher walked about 30 yards toward the sidewalk, and pushed Occupy Tampa’s journalist Mike Madison into the park, and then issued him a verbal trespass warning.

But Madison said he was more concerned that Daiquiri Jones might be locked up for a while.

“I don’t have an answer for why he was arrested. He’s been repeatedly arrested and charged with felonies. I just got a verbal trespass, but I’d worry about Daiquiri Jones right now.”

Some members called it a test run for their potential month long occupation of a park, but protesters seemed content with the new location. Kade Kelly set up his camp atop the hill earlier that night, hoping that the group could also make a difference in the community.

“It’s next to an area that we thought we could possibly help, and we are definitely speaking for…and speaking with, bathrooms, which are fantastic and more room.

Reporter: “Do you think that’s going to be important to have this much more room?”

The group also called attention to World AIDS Day, and they held a candlelight vigil before laying down their bedding. Owen Gaither called for solidarity with other political movements.

After police left, at least two members of Occupy Tampa continued to sleep on the park grass overnight, to show solidarity with those arrested. 62 protesters have been arrested since Occupy Tampa began sleeping overnight in public 55 days ago.

Here are more photos from the overnight arrests by WMNF News’ Janelle Irwin.