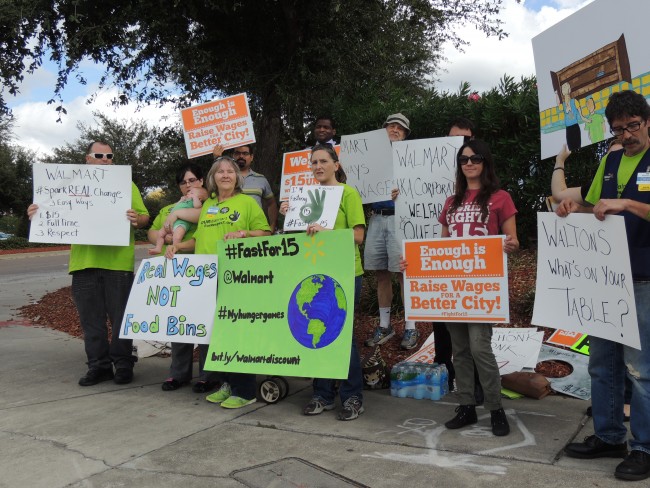 More than 100 workers across the country are going on a fast to demonstrate against low wages at Walmart.

About a dozen workers protested Tuesday afternoon outside a Walmart on Dale Mabry Highway just north of I-275 in Tampa.

Nancy Reynolds has been a cashier at Walmart for almost 8 years. She is diabetic so can’t fast, but is giving up her daily diet cola until the day after Thanksgiving to symbolize the meals that her co-workers often are forced to skip because of low wages.

Reynolds says she wants a $15/hour wage from Walmart and full-time hours for employees that want it. Some of her colleagues returned today from New York where they protested outside the penthouse apartment of Alice Walton, one of the billionaire owners of the discount store empire.

Angela Williamson is the organizer for the workers’ advocacy group Our Walmart in Florida.

“And then we’re asking for Tampa and the community out here in Central Florida to fast on the 18th. Some people are fasting for 15 days, they’ve been on it. Some people are jumping in and jumping out or coming in for a couple of days and then passing it to someone else.”

Williamson says on the day after Thanksgiving at ten in the morning there will be a rally and community food drive outside the Walmart at 1505 North Dale Mabry Highway in Tampa. They’ll donating the food to The Well.

“We know it takes quality associates to give our customers a great shopping experience and we’re proud of the wages and benefits package we offer. Our average full time hourly associate earns more than $13 an hour in addition to the opportunity for quarterly cash bonuses, matching 401k and healthcare benefits. Walmart is investing $2.7 billion over this year and next in wages, education and training for our associates because we know they make the difference.”