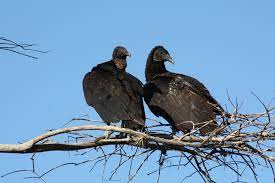 Danielle Hall—a wildlife ecologist, who, drawing on her professional expertise and her longtime personal passion for animals, has stepped into an intense humans-versus-animals battle that’s erupted over vultures in a Tampa neighborhood—explains in a “Talking Animals” interview what a wildlife ecologist is, and does.

Hall recalls loving fauna of all types since early in her childhood, noting she was one of those neighborhood kids who was known to tend to sick or injured animals and birds. She traces the path from precocious rescuer to academic studies that would help enable her to work with, and help, wildlife as an ongoing profession.

Hall describes the clash that’s arisen in Westchase Community in Tampa’s Northwest Hillsborough County, pitting a number of residents of that community against black vultures that live nearby, where they have a rookery; it’s nesting season.

Hall notes that the birds have ventured onto people’s property, landing on fences or rooftops, sometimes pooping during these visits. This behavior outraged some of the homeowners—it’s unclear just how large a group this actually represents, but it has been vociferous enough in its complaints that the U.S.D.A. got involved.

The U.S.D.A. formulated a plan to frighten away the vultures with loud fireworks, and if that part of the plan failed, the next part of the plan was to shoot the birds! There have been an array of meetings about this conflict, and this U.S.D.A. plan, and Hall has attended many of them, owing to her own concern, as well as on behalf of Florida Voices for Animals. She reports on the meeting that occurred the day before this interview, and suggests that people bothered by this U.S.D.A. plan voice their opinion to the Florida Fish and Wildlife Conservation Commission (FWC)– https://myfwc.com–and can get updates on this saga by checking the Florida Voices for Animals Facebook page: https://www.facebook.com/FLVoicesForAnimals.

It may be important to note that, over the course of this “Talking Animals” conversation, several listeners weighed in with unanimously positive comments about vultures, and their virtues—including a caller named Richard, who mentioned that, for many years, he’s had a very smart, very good friend…a vulture named Elvis. Turns out Hays is good friends with Elvis, too.