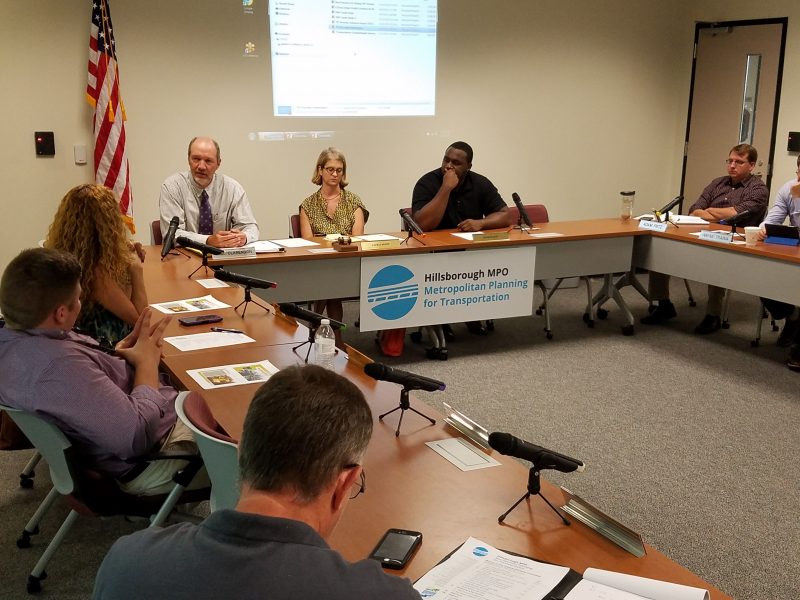 There will be a series of public meetings and workshops about the controversial interstate expansion project known as Tampa Bay Express beginning at the end of the month. Despite the upcoming meetings, some opponents of what’s called TBX say the Florida Department of Transportation’s outreach effort is slanted. But attorney Laura Lawson, chair of the Citizens Advisory Committee to the Hillsborough MPO, says there are chances for the public to weigh in on TBX.

“I have been concerned about the need for more of a community discussion of the pros and cons of the project. Not just how it would benefit a commuter, for example, but, the need to really to talk about: what is this highway going to do in the neighborhoods? What’s it going to look like on a street level?

“I personally would like to see a drawing. So, we’re gonna have this big interstate. I want to see it with a little bungalow next to it and all of that. I think people should be able to have the opportunity to really understand what’s going to be built before it’s built. I feel that that would give them the more effective way to have input.

“The community discussions that have gone forward, I feel, have been more about: ‘OK, we’re building this thing, what can we do to make it a little better for you?’ Whereas I feel that citizens feel that they didn’t have the opportunity to first say: ‘Well, what about something else? Can we try something else?’”

The Citizens Advisory Committee met Wednesday morning in Tampa and took public comment. Ed McKinney, a planning and environmental administrator with the Florida Department of Transportation, says FDOT is making efforts to take input from all sides.

“At all of our meetings we have been providing a lot of opportunities for community engagement, which is getting feedback. A lot of the–some of the feedback we have been getting has been anti- against the project.

TBX proposes increasing the number of lanes on the interstate highways in Hillsborough and Pinellas Counties and charging tolls on some of those lanes. During the public comment part of the meeting a bicycle advocate suggested that adding more lanes of vehicle traffic could affect air quality. FDOT’s McKinney says those impacts are taken into account.

“In the State of Florida, there’s no “non-attainment” areas. In this project, air quality is something we reviewed in our environmental process. We understand that concern and we’re addressing that concern.”

“We had heard previously from someone here, at the Hillsborough Environmental Commission, I believe their called and they were speaking to the issue of air quality here. We’re not quite on the cusp where we get the highest level of regulation, with regard to air quality, however, it remains an issue.

“Our main issue in Hillsborough county, at this point when it comes to air quality is automobile emissions. So, it is a very relevant question and my understanding it is something that will be reviewed, as part of the environmental studies that are done in conjunction with TBX. Those are still pending and coming out.”

Earlier this year the MPO approved a list of projects slated for funding, including TBX. It will vote again next year on the transportation improvement program, which is likely to still include TBX.

In early October there will be public meetings in Pinellas and Hillsborough Counties about the TBX section on the Howard Frankland Bridge.  Next January it will cover the sections of I-275 through Tampa, including the I-4 interchange known as “malfunction junction.” There’s a list of more meetings below.

There are more videos below.

Here are some upcoming TBX public meetings, via MPO:

February 2017: One Page Summary to MPO Board

March 2017: One Page Summary to MPO Board

March 2017: Presentations to MPO Committees on Section 6 & 7 Charrette Follow Up

Here are some other issues covered at the MPO CAC meeting …

And a little bit from the Hillsborough PTC; public comment on Uber and other ride-hailing services: